BP announces $6.1 million for mine clearance in Angola
LARGEST EVER CORPORATE DONATION TO LANDMINE CLEARANCE

BP Angola today announced it has increased its financial grant to $6.1 million over three years to support the work in Angola of British landmine clearance charity the HALO Trust.

An additional $4.9million of funding has been agreed to bolster the $1.2million grant announced in May 2019 as the pair widen their ambitions for the region.

The new funding will support HALO’s 100 Women in Demining project. The initiative was launched in 2017 in recognition that rural women in Angola suffer disproportionately from poverty, unemployment and lack of opportunities. The project clears minefields safely while empowering women through jobs, skills and training.

The new funding will support the employment of 129 staff, including at least 85 women in the western Angolan province of Benguela. In total, the project aims to return 338 acres of land – equivalent to 191 football pitches – to local people for safe use and help remove the threat of landmines from the province by 2023.

Our work stops people being killed. And my life is different because I have learnt many things. I have learned to be independent and I am earning.

Cristina added: “Demining is important to me because there are lots of accidents caused by mines in places where there was fighting in the war. I am sending money home to my mother so she can build a new house. We never tire of each other in the demining camp because we are going to make Angola free of mines.”

The women in the project are recruited from communities affected by mines. In addition to providing the training, skills and support necessary for safely clearing land, the initiative will also train women to be medics and mechanics and provide skills development in logistics, finance and IT, giving them flexibility for future employment and career development within HALO.

The funding continues BP Angola’s investments aimed at meeting social and community needs in the areas of education, enterprise development and capacity building for health, safety and the environment in Angola. Over the past 15 years, BP Angola has invested $100 million in local communities and social initiatives. 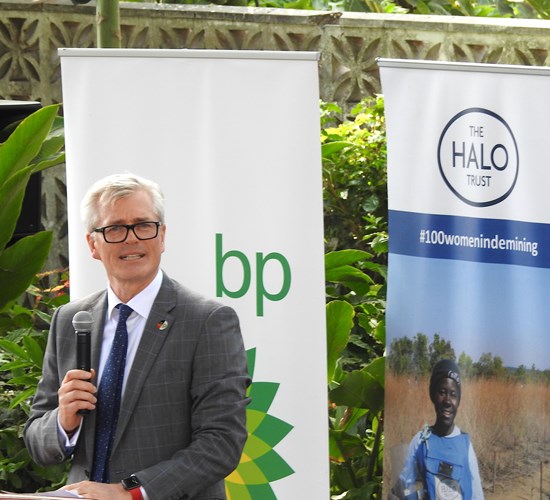 “The elimination of the terrible legacy of landmines is essential for the future of Angola. BP is grateful for the opportunity to help drive this agenda, and to do so in a way that creates opportunities for Angolan women and local communities. This initiative with the HALO trust, supported by the ANPG and MIREMPET, will make it possible to clear Benguela of landmines and we hope it will inspire further efforts to achieve the same aim in every province in Angola.”

"This is an initiative that all of us in BP Angola are passionate about. HALO Trust is an incredible organisation which empowers women and the communities they live in and we are pleased to continue our support of their great work.”

Angola’s 27-year civil war ended in 2002, leaving behind one of the most-mined countries in the world. Today, minefields cover 23,000 acres of land in Angola that could be used for farming or to build homes, schools and clinics. Since 1994, HALO has cleared more than 880 minefields and 97,000 landmines in the country. Almost 1,200 suspected minefields remain to be cleared.

James Cowan, chief executive of The HALO Trust, added: “The HALO Trust is very grateful to BP Angola for its generous support for our all-female demining teams. Their support for HALO’s 100 Women in Demining project helps us to achieve greater gender equality in mine action and ensure a prominent and permanent female presence in demining worldwide.

“Together HALO and BP have expanded their ambitions and now plan to clear 53% of the remaining minefields in Benguela Province. The $6.1 million grant is one of the largest corporate donations to humanitarian mine clearance ever made.”

“As a British charity which recently hosted Prince Harry, the Duke of Sussex here in Angola, it is particularly fitting that this support comes from a leading British global corporation.

The project will support the Angolan Government’s goal to be mine-impact free by 2025, in line with its obligations to the Ottawa Landmine Treaty. HALO estimates more than 10,000 people living close to the minefields will benefit from the initiative.