Halo and partners to lead on £46m of UK aid to protect up to one million people from landmines.
The HALO Trust and an alliance of landmine clearance charities will lead a £46m support package from the UK Department of International Development (DFID) to clear minefields in nine of the world’s most badly affected countries.
The funding will ensure that minefields equivalent to the size of 16,000 football pitches will be cleared across Africa and Asia by 2020. At least 820,000 people living near minefields will benefit from the UK aid. The clearance will be undertaken by a consortium of four organisations dedicated to clearing the world of landmines: The UK’s HALO Trust and Mines Advisory Group (MAG), as well as Norwegian People’s Aid and the Geneva International Centre for Humanitarian Demining.
In Angola, where the HALO Trust famously escorted the late Princess of Wales in 1997, UK Aid will support women from impoverished communities to train as HALO deminers, vehicle mechanics and paramedics.  Prince Harry spoke publicly in 2017 about his mother’s determination to ensure the plight of Angolan mine victims would not be forgotten. Today’s announcement cements the UK government’s commitment to helping Angola achieve a mine-free future.
UK Aid will also support HALO teams in Somalia and in the autonomous region of Somaliland where significant progress has been made to clear the entire territory of anti-tank and anti-personnel mines by the end of 2019. HALO is the third largest employer in Somaliland and its highly skilled workforce will be integral to securing future investment there.
UK Aid will also fund teams in Zimbabwe who conduct clearance on the barrier minefields on the country’s borders – which contain some of the densest concentrations of landmines in the world. Removing the mines will play a key role in opening up Zimbabwe’s agriculture and allow hundreds of children to walk to school without crossing minefields.
Meanwhile in Cambodia, Laos and Burma, entire communities will be safeguarded from the deadly legacy of conflicts, opening up agricultural and development opportunities on land currently too dangerous to be used.

HALO Trust CEO James Cowan said: “The HALO Trust was founded exactly 30 years ago to free the world from the scourge of landmines for good. Today’s announcement moves us closer to that day and it should be a source of immense pride that the British people are playing a key role in its realisation. Mine clearance is the very first step in creating stability, development and ultimately self-reliance for people whose lives continue to be blighted by conflicts long after they end. Thanks to British taxpayers, these people will be able to live, learn and cultivate in safety.”

International Development Secretary Penny Mordaunt said: “The crippling legacy of fear, mutilation and devastation, which landmines leave, must be wiped out for good. UK expertise and innovation is helping to shield vulnerable people from these barbaric relics and liberating land contaminated with these devices. This will allow the poorest people to grow crops, walk their children to school without fear and ultimately give them back control over their lives. The British public should feel immense pride in their critical contribution, at a time when unprecedented numbers of innocent people are dying as a result of these brutal indiscriminate killers.”

UK support will also help educate a further 280,000 men, women and children about the dangers of landmines, an essential lifeline to safeguard affected communities from mutilation or death.

UK Aid to mine action has benefitted up 2 million people and cleared 36 sq km since 2014. In addition to the countries announced by DFID today, UK aid for mine action will be allocated to clearance projects in Afghanistan and Iraq, including a pioneering operation to clear IEDs from Fallujah that were laid by ISIS. 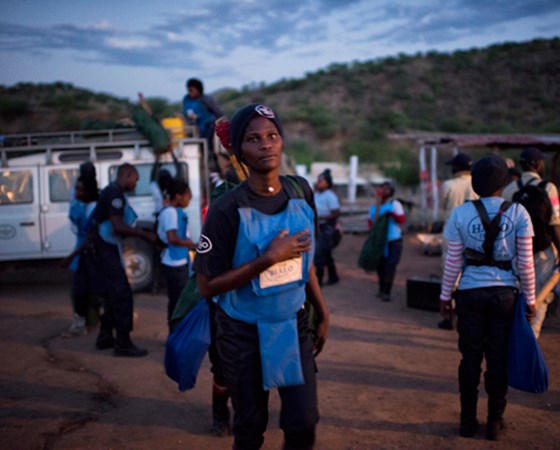 Meet Olímpia Nduva Chicoma Dala, one of HALO Angola’s 100 Women in Demining. Thanks to UK Aid, HALO is training and employing all-female mine clearance teams, empowering women to shape their own future. 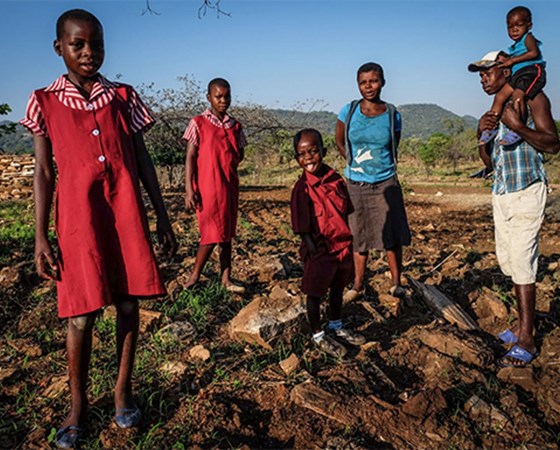 Imagine if your land was split in half by one of the world’s densest minefields. Do you risk crossing mined land or see your family go hungry?
Discover how UK Aid saved the Kashano family from this impossible choice.

- A programme in Afghanistan led by the United Nations Mine Action Service (UNMAS).‎

- An extension of the Global Mine Action Programme, which was delivered by The Halo Trust, MAG, Norwegian People’s Aid and the Geneva International Centre for Humanitarian Demining in Burma, Cambodia, South Sudan, Somalia, Zimbabwe, Laos, Sri Lanka and Vietnam.‎

- A programme in Iraq and another in Sudan both delivered by UNMAS.

- A programme in Yemen delivered by the United Nations Development Programme (UNDP).

For more information contact Paul McCann on 07967 853217 or Louise Vaughan at louise.vaughan@halotrust.org