A Cluster bomb in the attic

In the dusty attic crawl space of an apartment building in Stepanakert, Araik Bakhshian hoists himself up a rickety ladder, puts on his kevlar vest and begins to meticulously arrange the tools and gear he has carried up for the work that lies ahead. Outside, colorful rows of laundry zigzag across the courtyard above a small, brightly painted playground and parking lot. It has been almost three weeks since the war in Nagorno Karabakh has ended and Stepanakert is beginning to bustle again as families return home.

Araik, or Aro, as he’s known to his friends and family, is a HALO survey team leader who specializes in EOD (explosive ordnance disposal). Deeply knowledgeable, with a steady, attentive gaze and a self-effacing manner, Aro has been with the HALO Trust since 2000, when the organization first began operations in Nagorno Karabakh. 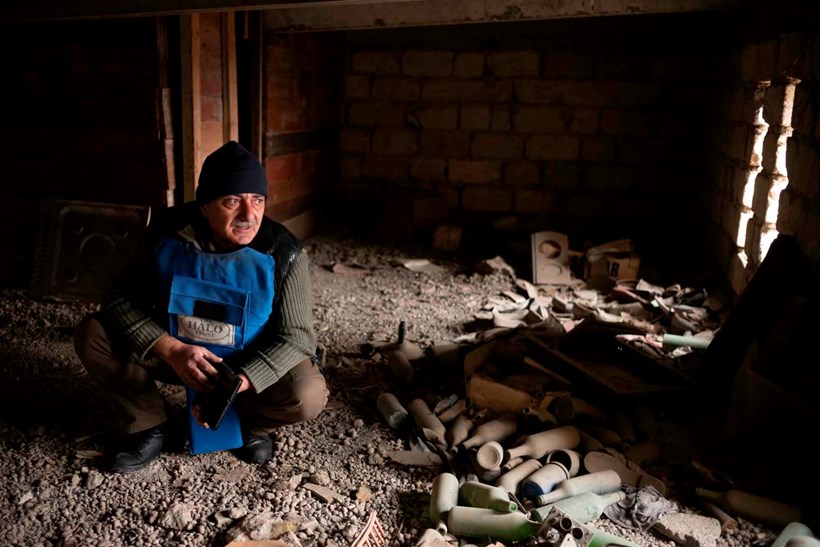 Nowadays, in the aftermath of a bloody 45-day war during which the capital, Stepanakert, and other urban centers like Martuni and Martakert were heavily shelled, HALO’s work in the region and the expertise of team members like Aro are especially crucial. After fleeing for safety during the war, families are returning to find unexploded ordnance, including highly sensitive cluster munitions, littered throughout their streets, in their backyards, and even inside their homes.

During the conflict, HALO staff mapped the areas of explosives contamination, dividing them into polygons and noting any reported information about the whereabouts and types of munitions found in them. This was a starting point for survey teams to begin collecting and recording data so that the clearance of hazardous devices could begin immediately.

The attic where Aro and his team are working is one such example. Earlier in the week, a survey team had been examining the roof of a five-storey building in central Stepanakert that had been struck by a missile when they noticed several pink ribbons, the telltale sign of M85 cluster munitions. While one side of the roof had been entirely destroyed, an unexploded submunition lay in a pile of rubble at the opposite end of the attic.

In an open area, the EOD team could safely destroy such an ordnance. Here, however, in a heavily-populated apartment complex with children’s bikes propped up in the stairwell just a floor below, it has to be removed with extreme caution, and taken to a place where it can be destroyed under controlled circumstances.

Aro and EOD Technical Advisor Wes Tomson have devised and tested a plan whereby the submunition is secured using a hook and line, coated with liquid foam and once the foam has hardened, raised it into TNT box filled with sand. Today, they are putting the plan to action. They successfully  carry the device down the stairs and out of the apartment complex, and destroy it in HALO’s testing ground. 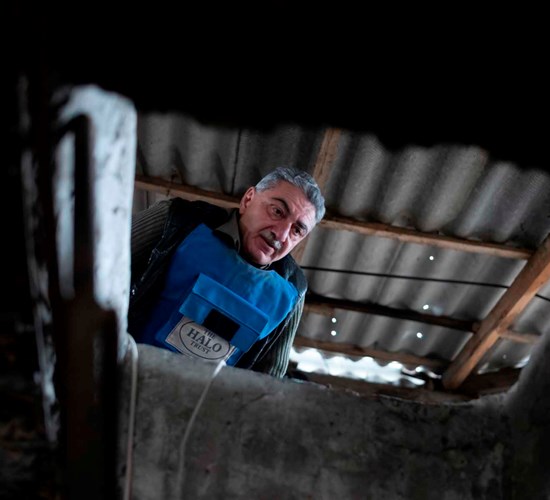 “People think it’s no big deal to just go around and blow things up. But in this job, if you don’t know what you’re doing, you won’t last. You’ll endanger yourself and others.”

In addition to his twenty years at HALO, Aro has a lifetime of rich and varied experiences that have contributed to his vast knowledge base and thoughtful, measured approach.

Born and raised in Stepanakert, Aro studied civil engineering in Baku. Upon graduating, he served in the Soviet military, spending two years in Siberia and Mongolia. He returned to Karabakh and after the 1990s conflict he joined the Rescue Service, where he was Commander of Operations.

“I had done some EOD in the Soviet military, during and after the first Karabakh war, then as part of the Rescue Service,” explains Aro. “So when I came to HALO, I wasn’t starting from scratch. But there’s always room to grow and learn. This is one thing I like about my job. I teach others, but I learn from them too.” Aro insists that “it’s important to know what you don’t know” and to continue learning every day.

As Karabakh reels in the aftermath of this conflict and people attempt to pick up the pieces of their lives, the scope and scale of the work ahead are not lost on Aro. Through the sense of loss, he remains focused. “This is my home,” he says, “and my job is to take care of it. I know I am needed here.” 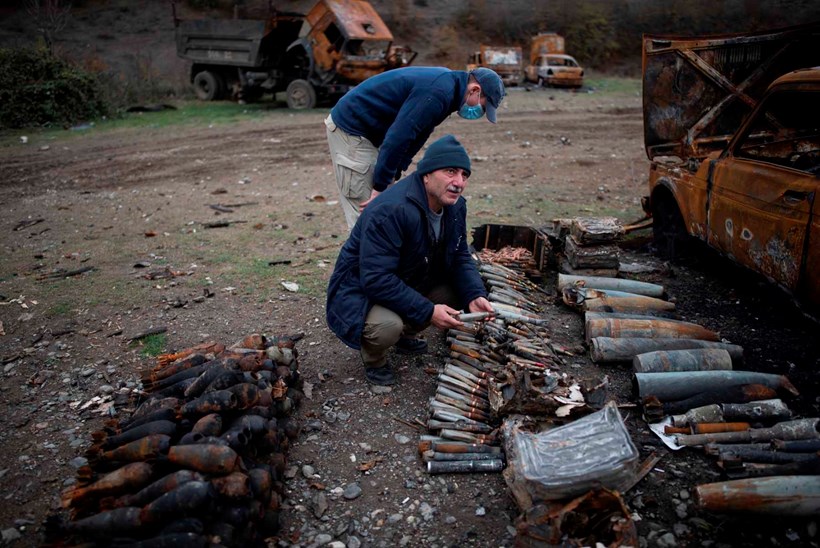