On the Somaliland border with Ethiopia, HALO is working to clear a minefield at Gocondale village with the National Demining Agency. The minefield, which runs linear to the border, was laid by the Somali National Army (SNA) during the civil war in 1988, in order to block the Somaliland National Movement (SNM) from accessing Somaliland from their camps in Ethiopia.

Section commander Abdullahi Osman Abokor started out as a deminer for The HALO Trust five years ago. A former SNA lieutenant, he acknowledges that he played a role in planting mines himself during the civil war. Indeed, many of his colleagues fought on the opposing side during the conflict. Abdullahi believes that working together towards a shared goal has helped them reach a better level of understanding and acceptance over the years.

The impact of clearing the minefield at Gocondale extends to the whole community. Village elders report that victims of landmines over the years include 16 year-old Idris Abdikadir, who was killed after detonating a mine when herding his family’s sheep and goats. Villager Xiis Hassan now uses a false leg after stepping on an anti-personnel mine in 1991. A further 13 camels and three goats had also been killed by mines, leading to significant financial loss. Apart from the obvious human risk posed by the mines, the minefield also contains a number of barkhads or open wells which the community is waiting to access once HALO’s clearance is complete.

Now her two sons herd the family’s 60 goats and continue to use the mined area for grazing and access to the barkhad. Xiis is relieved that her sons will be able to walk around their home in safety due to HALO’s clearance. She stated that the clearance was good for the community and would make the hazardous area safe.

We then met with Abdi-Awad Iman, who worked as a deminer with HALO for three years . He has one wife, four sons and four daughters, and the family owns 150 sheep and 15 camels. He has cultivated the area around his house, which is located around 5km outside the village to the east of the minefield, for grazing. Their home is directly adjacent to the minefield.

He stated that he would use the cleared minefield land close to his house for farming maize which he will use for animal feed and for subsistence for his large family, selling any extra. He believes that the clearance will therefore make a big difference to his family’s finances.

He noted that he crosses the minefield to access water from the barkhad and to reach the market in Gocondale village. However, he had warned his children not to play in the minefield and had shown them mine risk education leaflets distributed in the village by HALO’s Mine Risk Education team. HALO’s clearance is therefore helping to secure both the safety of Abdi-Awad’s family and their financial security. 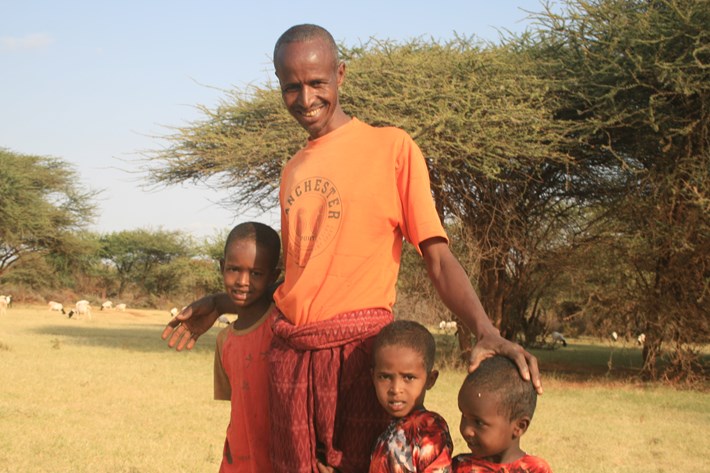