From the minefield to the hospital ward

Taghui used her HALO medic training to help her community

One of the doctors at the Stepanakert Hospital nicknamed her “Sunny Girl” (Arev Aghchik). In the HALO courtyard early on a drizzly November morning, as she waits for her survey team to be dispatched, Taguhi Grigoryan flashes a wide smile, lighting up the dreary, grey day. It becomes instantly apparent how she earned the nickname.

At 28 years old, Taguhi has been working at the HALO Trust for two years. She studied law, but after seeing an ad on television for an opening at HALO, she decided to give it a try. She is now an assistant team leader. Before the recent conflict, her work involved determining the size and location of minefields laid during fighting in the 1990s. Following the recent war it now involves rapidly assessing the unexploded munitions littering Karabakh and endangering displaced people as they return.

“My family was not thrilled at first,” Taguhi concedes. “My mother, especially, worried that it was too dangerous. But I’m drawn to the excitement of this job. Yes, there are risks, but my training allows me to handle them wisely. Besides,” she jokes, “I was going to become a lawyer. That’s dangerous too, in its own way!”

Taguhi was in Yerevan on September 27, the day the war began. Her father, who died in the first Karabakh war in the early 1990s, is buried there. She was visiting his grave. As soon as she received word of the shelling, Taguhi rushed home to Stepanakert. The following morning, after sending her mother and 16-year-old brother to Yerevan, she and fellow HALO assistant survey team leader, Mariam Matevosyan, showed up at the hospital to volunteer as medics. “We are trained in first aid by HALO,” says Taguhi, “and we were determined to put what we know to use.”

For the duration of the war, Taguhi and Mariam worked tirelessly around the clock and slept in the hospital shelter. They did whatever was needed, from dressing wounds and assisting with surgeries to lifting the spirits of their patients. “Even when the situation was very grave, we would try to keep it light,” says Taguhi. “We would joke with them, offer them food, sit with them for as long as they needed.” Noticing how exhausted the doctors were, she would make “really strong coffee” and make her rounds around the hospital. “It was emotionally and psychologically draining at first,” confesses Taguhi, “but we got used to the fact that our job would involve extremely difficult situations, and we were there to do that job.”

Throughout the war, HALO staff were mapping areas of explosives contamination to facilitate the process of conducting surveys and clearing unexploded ordnance. Periodically, Taguhi, Mariam, and the other staff members who had remained in Karabakh would gather at the HALO compound. “It was always such a relief and a joy to see each other,” says Taguhi. “We would share our stories, support each other in our losses. We’re really one family.”

Barely two weeks out of the war, Taguhi is ready to head back out into the field with HALO. The conflict has left unexploded cluster bombs, shells and other munitions scattered across the territory. “Our work is more important now than ever,” she says. “The safety of our children, our future depends on it.” Her ever-present sunny smile is accompanied by an earnest resolve to show the world that “we’re here, facing forward, ready to take on whatever challenges await us.” 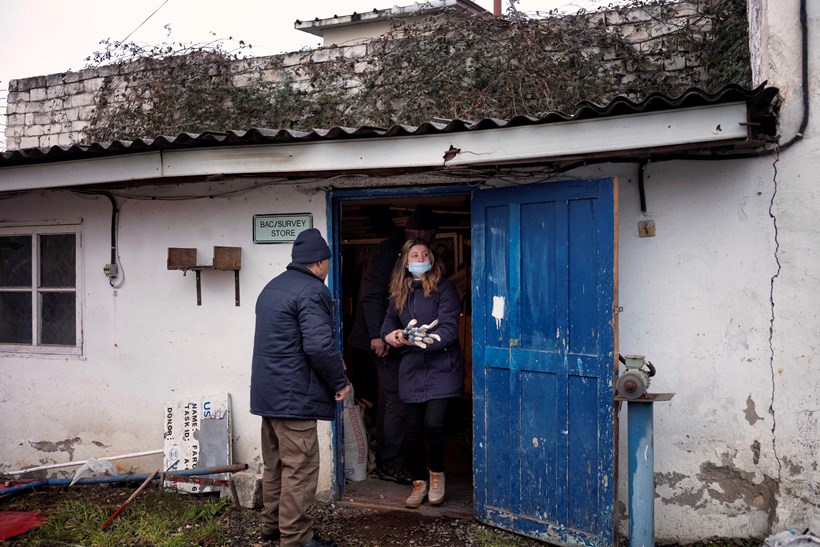