Before the war, life in the sleepy village of Kodema in eastern Ukraine was good. This is an agricultural community with expansive fields soaked in sunshine in the summer and lush grazing plains where farmers take their cattle.

Lubov Vladimirovna has lived here her whole life and today tends to a herd of cattle she owns with her husband. But in 2014 her peaceful existence was shattered when Kodema found itself at the centre of a battle between government and non-government forces. For two years the village was on the frontline of the fighting and the shelling continued as the Ukrainian army tried to regain control of the neighbouring villages. The fighting is now around 5km away but it is never far from the minds of Kodema’s residents.

“There are still families living here—kids, mothers, fathers. But what is left for the people here? There’s nothing left now.” Lubov Vladimirovna

The people of Kodema are haunted by the horrors of the last four years. With tears in her eyes, Lubov describes the impact on her neighbour’s children.

“At night, the little ones cry because they can’t fall asleep. They only sleep when it’s sunny, because in the dark they hear the shelling.”

The presence of landmines is also a lasting reminder of what the village has suffered. Left behind by the soldiers they have already had a deadly impact—seven people have been killed or injured by mines or the explosive debris of war. Lyudmila is a close friend of Lubov and was grazing her cows on a hillside when her foot caught a tripwire, triggering an explosion. The blast seriously injured her left leg and arm.

“The doctors told me I’m very lucky to be able to walk, and even stand. I’m back at work now— I need money to live somehow! But we don’t use that grazing land anymore, even though the grass there was really good.” Lyudmila

The shadow of the landmines also weighs heavily on Lubov:

"Before the war, things were good. We used to take our animals out into the fields to graze, and we grew our own hay. But when the fighting began I stayed closer to home, I was afraid to take the cows to my land on the other side of the village.”

In 2015, Lubov’s fear was confirmed when soldiers knocked on her door to tell her the land was mined and she could no longer use it because of the danger.

“That meant the permanent loss of access to the hay we grew for our cows. We have to buy it now, and it’s very expensive—one bale costs 60 UAH ($2.16), and it’s even more after winter. There’s nothing we can do, we have to buy it because we have to feed our cattle somehow.” 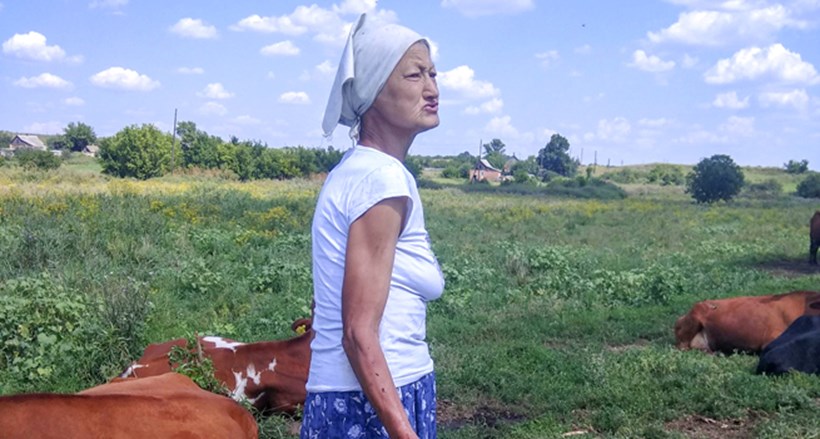 "Before the war, things were good. We used to take our animals out into the fields to graze, and we grew our own hay. But when the fighting began I stayed closer to home, I was afraid to take the cows to my land on the other side of the village.”

Lubov didn’t know when she would ever get her land back, until, in early August 2018, HALO started work to rid Kodema of the mine danger. More than 650, 000 square metres of land in and around the village has been identified as hazardous—contaminated with landmines, including anti-vehicle mines which would kill several people in a single blast, and other explosive debris left behind by the shelling. Two of HALO’s teams, funded by Britain and Norway, are now working to clear this land, to bring Lubov and her neighbours the safety and prosperity they have lived without for so long.