Making the river safe for Oksana

Ozerne village in Donetsk oblast lies next to the Siversky Donets River. The river was once popular place for anglers due to the slow streams of fresh water, but during the conflict in 2014 between Ukrainian and separatist forces, it witnessed fierce fighting.

A bridge across the river was a crucial piece of infrastructure controlled by non-government forces between April and June 2014, before being taken back by the Ukrainian Army.

Oksana Semigon, 37, lives in Ozorne village. She now cares for three orphans of the conflict. Her seven and 13 year-old nieces and two year-old nephew lost their parents when the family attempted to evacuate the village. Since their house was destroyed during the conflict they now live with friends of the family together with four other relatives. Oksana is unemployed and relies on support from the state and the family has a small garden to grow vegetables. They also catch fish in the river to supplement their diet, but this is a dangerous business.

HALO conducted a non-technical survey in the area in early 2016 and found evidence of mines laid along the river. Local informants reported anti-tank mines, trip-wires and directional fragmentation mines that could kill and maim large groups of people in one detonation. Due to the proximity of the mined area to the village, the task was identified as a humanitarian priority and HALO quickly started mine clearance operations.

Across the whole conflict zone the use of anti-personnel and anti-vehicle mines, cluster munitions and improvised explosive devices during the conflict have taken a heavy toll, with at least 250 people killed and 470 injured by explosive remnants of war in Ukraine since mid-2014 according to the International Committee of the Red Cross. Since December 2015, there has been an average of over 50 casualties per month from mines and improvised devices.

HALO is being financed by donor governments to clear parts of Ukraine but it could do more with donations from the public, making it safe for families like Oksana's to fish in the river.

HALO has identified three hazardous areas around Ozerne village. Clearance of these sites started in early 2016. 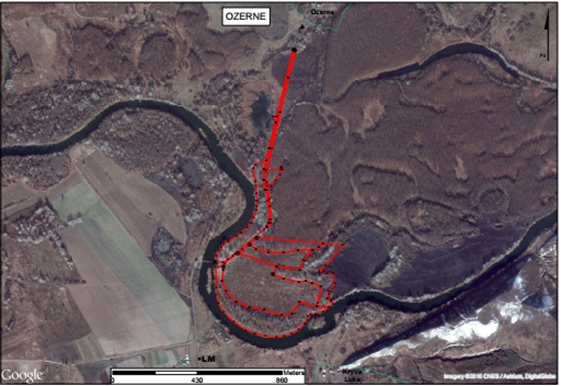