Last month, Olga Kislovskaya became HALO Ukraine’s first female Team Leader. Her career with HALO only began just over a year ago when she became one of the programme’s first women deminers. However, within a few months, Olga had already proved her reliability and work ethic and was promoted to the positon of deminer-paramedic, where she continued to excel. Team Leader training was the natural next step, and in early 2018 Olga passed with flying colours.

Before joining HALO, Olga worked as a kindergarten nurse and as a cashier in supermarket, but it is at HALO that she found her true calling:

“This is the best job I have ever had! I love it!” Olga Kislovskaya, Team Leader, HALO Ukraine

Today Olga is responsible for a team of twelve, leading the way in a role that has not traditionally been fulfilled by women in the Ukraine. Her team are also currently pioneering the clearance of a new threat not previously experienced by the programme—minimum metal anti-vehicle mines. 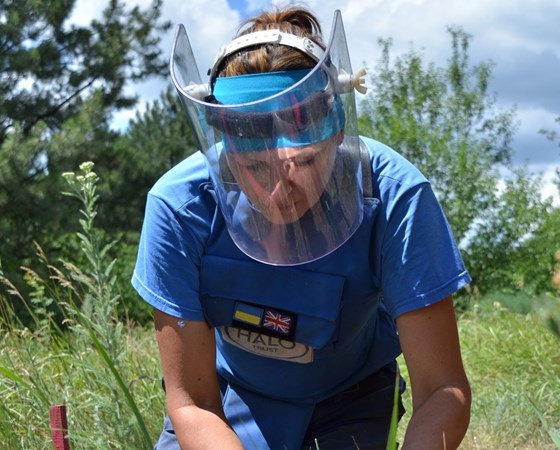 Olga was promoted to Team Leader for HALO Ukraine in May and is now responsible for 12 deminers in the field.

Working conditions are tough. Olga and her team are based in the village of Sartana, Donetsk which is in the buffer zone – less than 15km from the Line of Contact. This means they must wear or keep their heavy body armour and helmets close at hand in case firing breaks out. However, Olga remains undaunted and her team have already cleared 10,796m2 of land (that’s equivalent to 40 tennis courts!)

“I get all the support I need from Ivan my supervisor, who works closely with all the teams in this area. I also speak regularly to one of the other, more experienced Team Leaders who works nearby, who is always ready to give me useful advice. I am grateful to both of them!”

The work of Olga, her team and HALO Ukraine is vital. After four years of conflict Ukraine is one of the most mine-affected countries in the world—since 2014 HALO has recorded over 1,900 accidents caused by mines and the explosive remnants of war. In March this year, a family of four was killed when their car hit an anti-vehicle mine in Luhansk region. Olga is determined to make her country safe and is ready to meet the new challenges that lie ahead. HALO Ukraine are proud to have such an inspiring new leader as part of the programme.