Paving a safe road to prosperity in Somaliland

Ahmed Nuur Aw Nuuh owns a small business in Ceel Bardaale, Somaliland, where he buys milk and vegetables from local farmers to sell at the market in the town of Gabiley. A town that should have only been 23 km away. But landmines were laid on the only road between the two towns during the country's civil war and subsequent conflicts, hindering safe access to food, and forcing authorities to keep the road blocked, prohibiting its use for years. The road was so heavily mined that some were clearly visible. Residents from Ceel Bardaale wanting to visit Gabiley must take an alternate route that stretches 44km around the towns.

This diversion doubles the journey times and fuel costs for local farmers and traders, preventing residents like Ahmed from providing for their families.

In August 2016, with funding from Ireland, Germany, and the United States, HALO began clearing the suspected sections of the road using manual demining teams. Shortly after demining began, two anti-personnel mines were found.

After months of work, HALO was able to reopen the road back to local villagers in late 2016, providing safer access to the vital services of transport and trade for the community and cutting the distance in half for travellers.  By clearing the mines, the cost of bringing goods to markets in Gabiley and even further towns has been reduced, impacting local farmers and traders like Ahmed - whose income supports his ten children. 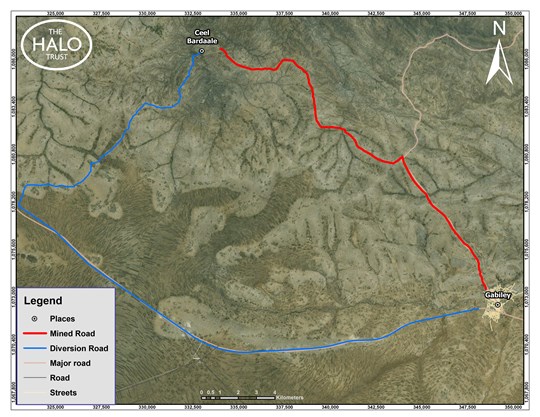