Reassurance and safety for communities dependent on livestock

With four school-aged children to feed, 34-year-old Gevork Asoyan is heavily dependent on his livestock and small garden. Apart from providing meals for their children, Gevork and wife Ani make around $50 a month from selling home produced milk and cheese. The family could make more, but Gevork is reluctant to buy more cows to increase dairy production. Their village, Karegah, is located in Nagorno Karabakh's Kashatagh region and is surrounded by hills that were used as key military positions during the 1992-94 conflict. Defensive mine lines were laid to protect the wartime positions but remained long after the ceasefire.

All 200 villagers face the same dilemma. Unable to stop their cows wandering off, they cannot prevent the loss of livestock to landmines until the whole are is comprehensively demined. In regards to purchasing more cows, Gevork responded:

Of course I'm afraid. The whole area is mined. I cannot control where my cows wander when they go grazing.

The HALO Trust have provided some reassurance to the community by clearing the first of three identified minefields during 2014. A team of 8 manual deminers, funded by the Armenia Fund and Landmine Free Artsakh campaign, destroyed a total of 21 landmines and four items of ordnance, covering an area of 16,613m2.

The cleared minefield was handed over to the village for safe use at the end of January 2015, during a handover ceremony attended by the regional rescue service. Village mayor Marine Petrossyan estimates that the area within and around the cleared minefield is used by 45 families who are each dependent on livestock for their livelihoods. However all villagers will benefit from the new opportunities for cutting firewood, hunting and foraging. Gevork reflects:

I was frightened when HALO told us that they had found 15 mines in just one small area, as I know that there are more minefields. My family is grateful that it was demined. It is a slow but thorough process and all mines will be completely cleared one day.

Mayor Marine Petrossyan agreed. She stated that Karegah village receives different assistance from various organisations, but freeing the land from the debris of war was a unique project which has made the entire village feel safe. 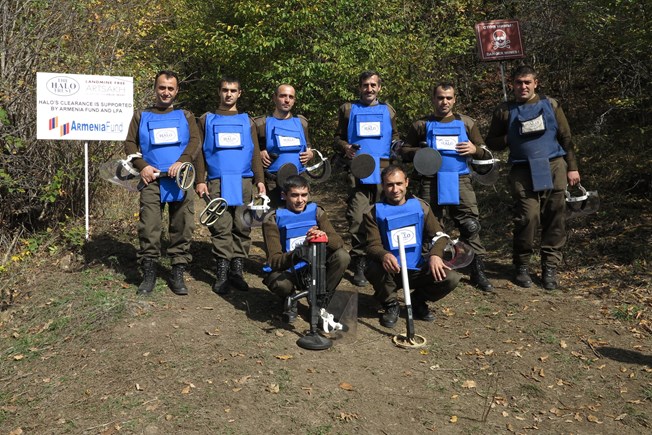