Since Abkhazia was declared mine free in 2011, HALO has retained residual explosive ordnance disposal (EOD) teams in order to destroy stockpiles of mines and ordnance and to survey suspected areas where no evidence of minelaying was previously reported. The teams also provided callout service to members of the public worried about potentially explosive items.

Three HALO explosive ordnance disposal (EOD) teams are funded by the US Department of State and the UK Foreign Office. Between 2013-2015, the teams responded to 556 callouts. These responses included the destruction of over 1000 explosive items, including aircraft bombs, improvised explosive devices (IEDs), as well as landmines. A further 2300 items were destroyed from stockpiles and a further 5 residual minefields were cleared. Here are some of the stories from the callout service.

Disposal of IEDs in Kutol 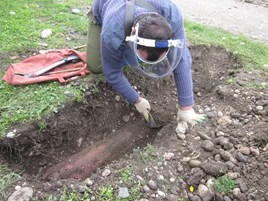 In April 2015, HALO received a call from villagers in Kutol. They were concerned that IEDs may have been laid nearby during the 1993 war The team surveyed the location with metal detectors and found an oxygen tank filled with homemade explosives. Further surveys detected two more cylinders laid in close proximity to each other, each filled with around 80kg of explosives. The discovery almost certainly saved lives, as the road is used by at least five vehicles per hour and families living within 50m of their location; in the past, HALO had received reports from other villages of IEDs detonating spontaneously during thunderstorms.

Discovery of ERW in a house

When Daur Gumba found a 23mm cannon round and an anti-tank mine near his home in Adzyubzha village during the 1993 war, he simply removed the mine's fuze and stored it alongside the cannon round in his closet, thinking it would be safe out of reach. The mine itself was removed when HALO conducted clearance near his village; however Daur had by then forgotten that he had kept the fuze in his closet. He was horrified when years later he discovered his grandson rummaging through the closet and handling the fuze. Thankfully, he was able to make an emergency callout to HALO and a team visited immediately to remove and destroy the mine. Mr Gumba's grandson can now play safely

HALO teams responded to a callout from construction workers renovating the cottage of the renowned Soviet World War II general and Khrushchev-era Defence Minister, Andrei Grechko. The territory around the general's cottage was the site of intense fighting during the Abkhaz-Georgian war, and was being renovated as a historical landmark. Construction workers found seventeen VOG-17 launched grenades in nearby bushes. HALO teams were called to remove and safely destroy the grenades, opening up the landmark house for tourism.

Disposal of a landmine near a monument

When students alerted their teachers to a landmine at the site of a war memorial where children were laying flowers, they knew immediately who to call. HALO teams arrived and quickly ascertained that the mine was fully armed. School pupils and members of the public were evacuated as the team destroyed the mine in situ. After an investigation, the team was able to determine that the mine had been placed there after the war, and the surrounding area was thankfully not a minefield. 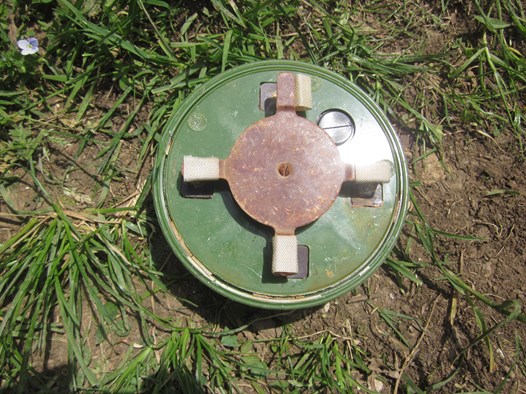 EOD callout from a farmer

Returning to his home after the war with his wife and three children, Alex Lokha was horrified to find four rocket propelled grenades on the surrounding land. He decided to hide the grenades in some bushes and put them to the back of his mind. When his children told him they'd since found them, Alex placed them on top of a high wall, out of their reach. Finally, realising there was only one way to guarantee safety, he called HALO to deal with the grenades. The items were removed and destroyed.