Rising to Further Challenges
In Myanmar

North Shan State in Myanmar lies about 500 miles north of Yangon. For many years, the State has seen some of Myanmar’s most intense fighting between a number of ethnic armed groups and the Tatmadaw—Myanmar’s armed forces. When not engaged against the Tatmadaw, the ethnic armed groups often fight each other, exacerbating instability.  As a result of conflict, civilian casualties have been high—not just from landmines and explosives—but also from air, artillery and mortar strikes. Many families have been forced to flee their homes due to the fighting, sometimes just for a few days but often for years at a time.

HALO has been working from its base in the state capital, Lashio for 5 years—funded by the Foreign Commonwealth and Development Office (FCDO) and the United Nations Office for the Coordination of Humanitarian Affairs (UN OCHA). We deliver risk education—teaching people how to stay safe from the landmines and explosives left behind by the fighting—as well as providing victim assistance to accident survivors and carrying out survey work to determine areas where landmines and explosives are present. 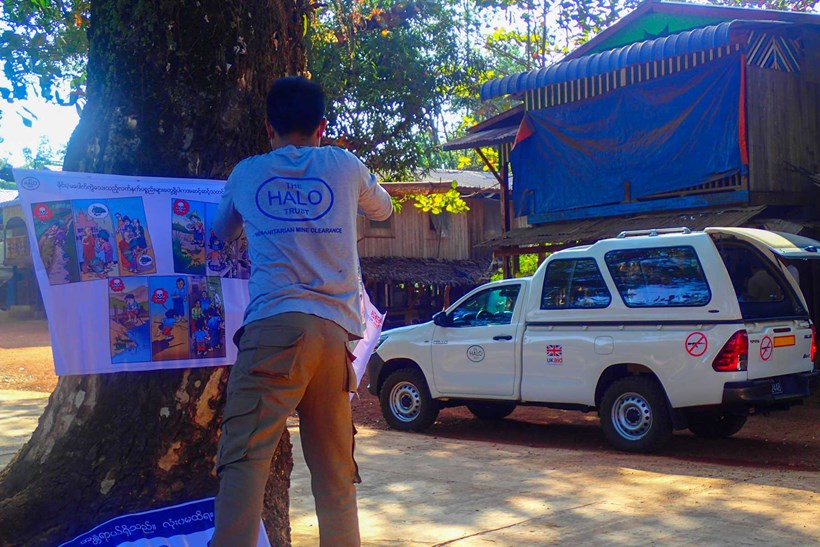 When the pandemic hit Myanmar a year ago, forcing a suspension of mine action activities, HALO swiftly switched to supporting the COVID-19 response —delivering essential hygiene kits and health information to displacement camps across North Shan State, thanks to funding from the FCDO, UN OCHA and The Souter Charitable Trust. As the months progressed, HALO teams began to offer household risk education sessions alongside the delivery of COVID materials, avoiding large gatherings to prevent the spread of the virus but ensuring live-saving messages reached those at risk.

Since 1st February, the country has been plunged into a new state of uncertainty, disruption and instability to compound the COVID problems already afflicting communities. Banks, shops, suppliers and transport networks have been forced to close, exacerbating the situation further.

After a brief pause in February to reassess the situation, HALO made plans to return to the field, purchasing more supplies of COVID materials thanks to funding approved by the FCDO at the end of 2020. This, in itself, was not an easy task due to the closure of the banks and lack of suppliers.

By the first week of March, HALO was ready to resume work and, despite security challenges and a general nervousness within communities, our teams began to deliver COVID supplies again. At the same time, we resumed our risk education sessions—reaching 400 people during the first few days alone. The dedication of our teams to keeping families safe remains as strong as ever, regardless of the fact that due to the closure of the banks they have not even been able to receive their February salary.

“Once again, HALO teams have demonstrated that they are undeterred by new challenges. Their determination to continue helping the vulnerable communities of Myanmar in this dark time shows their resolve and strength of character and I am immensely proud of them."

The Government of the United Kingdom