The Poetry of Demining in Somalia

Listen to Hassan on BBC Outlook

HALO's programme in Somalia has produced a book of poetry written by local staff and designed by the Scottish-based illustrator Abigail Salveson. The book taps into Somali culture's reverence for poetry to tell stories of love, war and mine clearance.

Hassan Kossar, HALO Somalia's operations manager, has been interviewed by the BBC World Service's  life stories programme Outlook about his life at HALO and the importance of poetry in Somali culture. 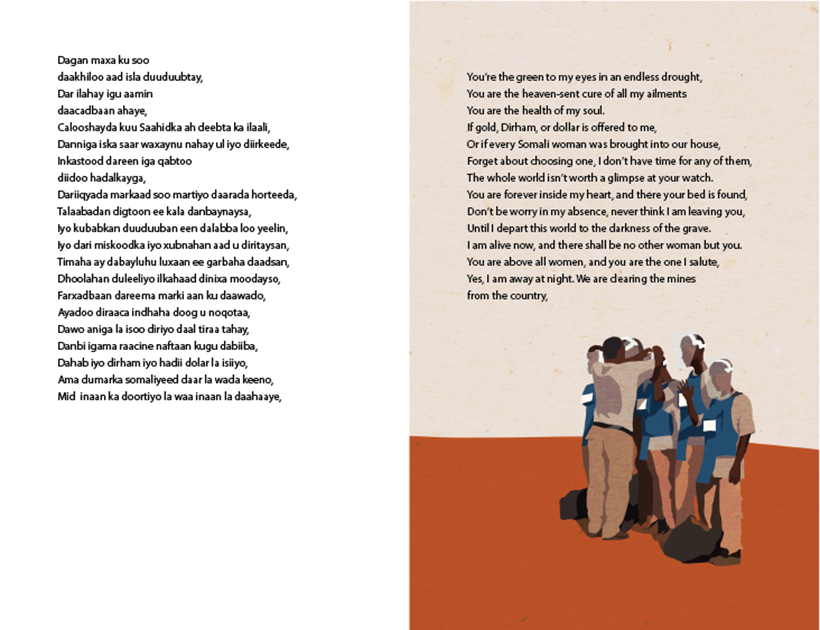 A page from the HALO Somalia poetry book

Hassan said: “Somalis have an oral society. The only means to convey messages from the past when a society has no pen and paper is to learn from the poems of the past. A poem that is 100 or 150 years old tell the old stories of war and love and culture. Poetry is the basis of our history.”

“I started writing poems down in 2017", says Hassan. "But I have some very talented guys in my team at HALO who can recite poetry right out of the blue. You get a lot of respect for being a good poet in our culture. My grandfather and grandmother were poets, we used to listen to her when I was growing up. She used them to tell us stories she had remembered. Once you learn to read and write it is not so important to remember – you use your notebooks.”

Hassan told the BBC the story of how his brother, his grandmother and he had to escape from Hargeisa during the fighting in 1988. At the age of eleven, he travelled only at night to avoid surveillance planes and patrols and hid in bushes during the day. “I was really terrified. I remember clearly being hungry, scared and exhausted."

"Sometimes in the dark we would hear the summer wind and think ‘they are coming for us now’. You just don’t leave your home unless it becomes a wild beast." 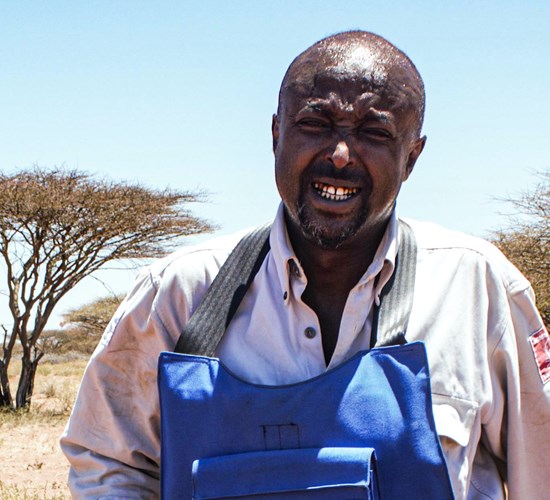 After several years as a refugee in Ethiopia, Hassan returned to Hargeisa when the conflict ended.

"There was unexploded ordnance everywhere – Somaliland was was littered. Mines were laid everywhere. Everything was rubble. Landmines around hospitals, around police stations and on the roads leading to villages. And shells and aircraft bombs, rockets, hand grenades that hadn’t exploded. It was chaos.

"I knew many, many, people who were injured by landmines and unexploded debris – students at school or pupils who would bring something into the playground. Once a friend banged, something I think was probably a cannon round on the bar of the goal post at school and there was a bang - and it took three of his fingers on his hand. He was covered in blood."

Hassan tells the BBC that every landmine, missile or hand grenade you destroy from places near to where children are playing means you have saved lives. "It gives you a sense of great humanity. We rely on our training and on our equipment and our standard operating procedures to stay safe.”

"I wrote poetry when I was stationed in Southern Somalia and was spending a lot of time in the house because of security. My first one was about being the world becoming landmine free in 2025. HALO is now publishing a book with a few by me and other team members. Poems are powerful. Quoting an old poem about a  tribal war can open old wounds and start fighting again.

"We are going to provide the poetry to our donors, to thank them for their years of funding HALO in Somalia and Somaliland. Somalis appreciate your generosity. We hope also to share them with the Somali community in Europe and America."

The HALO demining programme in Somalia is made possible thanks to the generosity and commitment of our supporters and donors.

Listen to Hassan on BBC Outlook