Mazret Al-Qalaa is a small town surrounded by farm land in Idleb in northwest Syria where Yasser Al-Sayed Issa started working in 2010, in an olive plantation. Between 2013 and 2016, because of fighting in the area, he was unable to work on his farm. In 2016, he was able to gain access to his olive trees again, but a relative of Yasser warned him that the farm might be contaminated by explosive ordnance.

“When I heard what he said, I was terrified”, says Yasser. Nevertheless, he still decided to go to the farm and start renovating it. As he entered one building, he picked up a stone on the floor and threw it outside. As the stone touched the ground, it exploded and sent lethal shrapnel over a wide area. Luckily no one was hurt.

In 2019, Yasser left Syria to look for a job in Turkey and handed the farm over to someone else, warning them about the contamination. They hired some labourers to harvest the olives. Not long after, Hussein, 24, became a victim of a landmine explosion among the trees. Hussein is married with a child and a second one to be born soon. He was severely injured by the blast which he recalls very clearly.

"My legs and eyes would not stop bleeding until the medical team rescued me and took me to the hospital."

Some of his colleagues came to help while others ran away, fearing another explosion. After his accident, Hussein had seven operations, five on his left leg which was eventually amputated below the knee. His eyes were severely damaged and for the rest of his life, he will suffer from sight problems.

In 2020, Yasser returned to Syria and claimed the land back. He hired workers to take care of the farm and harvest the olives, who he closely supervises himself. “I always make sure to warn the workers about the contamination and I keep them from approaching dangerous areas”. Yasser wants the farm to be cleared from explosive ordnance so that he can work safely on it.

HALO’s survey team visited the farm in March 2022, and it will form part of our clearance plan in the coming months. In addition to protecting people like Hussein from long-term injuries, the clearance of the olive plantation will allow Yasser to cultivate the land safely and productively.

The economic ripple effect will have an impact on the entire community because seasonal workers will be able to work the olive groves and make a living from them. In northwest Syria, much farmland is contaminated by explosive debris and so prevents people from having access to food and jobs. HALO clearance projects aim to increase their resilience by offering valuable livelihood opportunities and creating safe and sustainable environments. 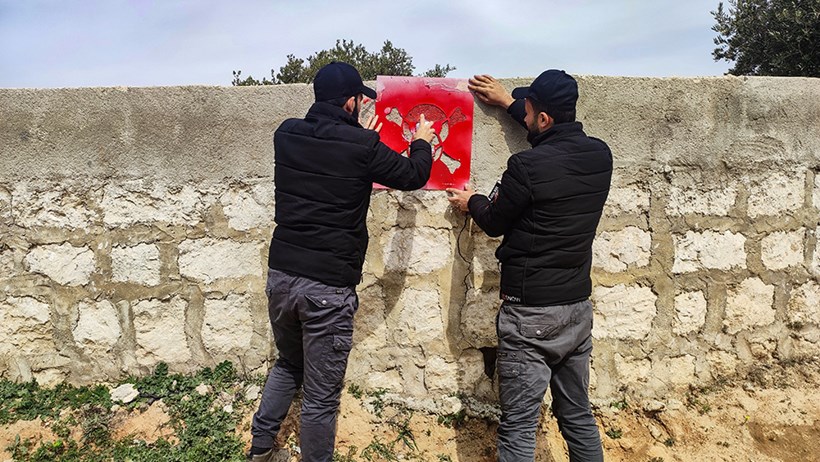