During Angola’s 27-year civil war, millions of families faced starvation or were forced to flee their homes. When the fighting ended in 2002, landmines and explosives littered fields, villages and towns, killing and injuring thousands. We have been clearing landmines in Angola since 1994, but our work is far from finished.  Children like Manuel are still suffering the consequences of a war that ended before they were born.

Since 1994 we have destroyed almost 100,000 landmines in Angola. Initially we focused on removing landmines in regional capitals and towns, such as Huambo, which Princess Diana visited in 1997 and is now a thriving city. 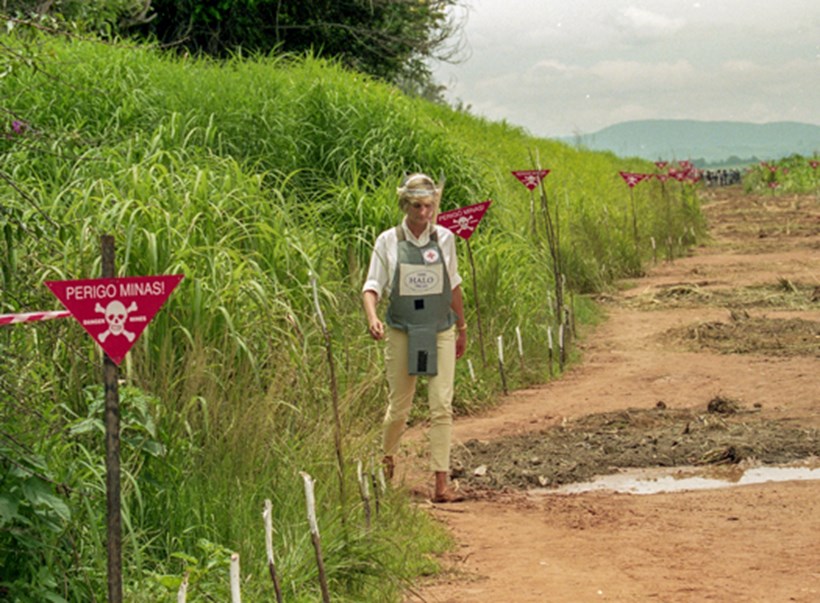 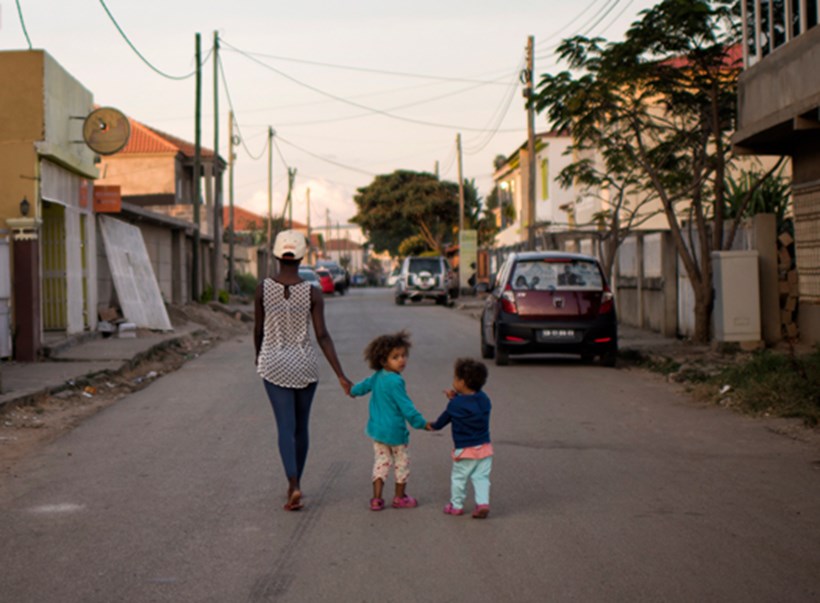 Today, our work is focused in rural areas, clearing landmines that have plagued communities for over 30 years. Safe land allows access to vital resources like water. Minefields can become fields of crops, houses can be built and livestock grazed without fear of accidents.

This year we will begin a unique project in partnership with the Angolan government to clear landmines in the Okavango headwaters—a World Heritage Site, which forms part of the five-country Kavango-Zambezi Trans Frontier Conservation Area (KAZA). Here, landmines make it almost impossible to conserve and protect the habitat and wildlife poaching is rife. By clearing the mines, we can lay the foundations for conservation-led development, allowing wildlife and local people to thrive.

In partnership with the Angolan police and military, we have also destroyed thousands of unwanted weapons and tons of ammunition, reducing the risk of armed violence or unplanned explosions. Finally, we keep people safe by teaching risk education—preventing devastating accidents like Manuel’s until we can remove all the landmines and explosives for good.

OUR IMPACT
"My job has helped my family a lot. In the future, I dream of having my own house where I can live with my daughter. I have already laid the foundations!"

HALO currently employs almost 700 local men and women in Angola. Our 100 Women in Demining in Angola project is training all-female teams to clear the landmines, empowering women like Suzana with skills, income and status, whilst making a safer future for their country. 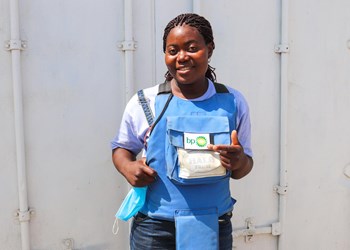 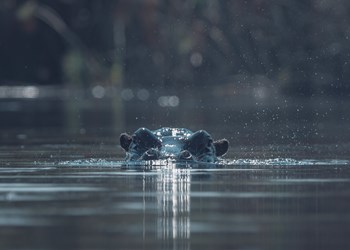 Drones to save wildlife in Angola
Read more 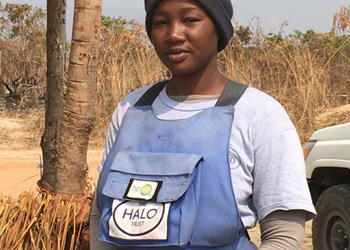 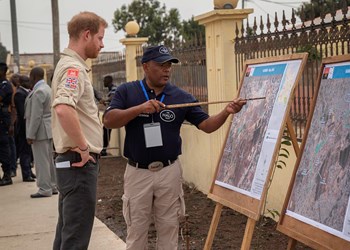 22 years of mine clearance in Angola: Valdemar Fernandes
Read more 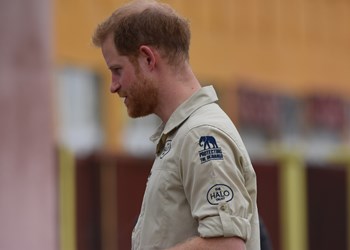 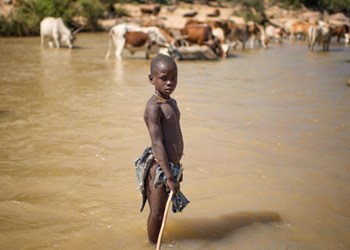 Learn about the ground-breaking project to protect the Okavango.
Learn More
Our Work in Angola is funded by:

The Government of Angola

Meet our team in Angola

Rob passed his operations training in Cambodia and IMAS EOD Level 3 in Nagorno Karabakh in 2015. Since then, he has worked in Turkey, Sri Lanka, Jordan, Libya, Iraq and Nagorno Karabakh, working on a variety of programmes from classical mine clearance operations to innovative, remotely managed EOD clearance  and urban survey projects. This is his second post as Programme Manager. . 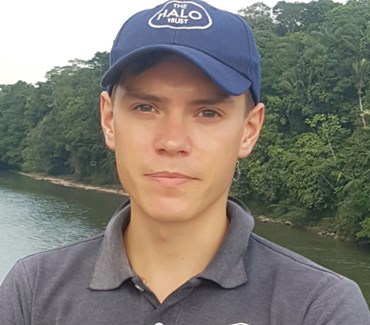 Dan joined HALO in 2016 as Programme Officer in Colombia before beginning operational training in Cambodia—returning to Colombia as a Location Manager. After a brief period managing the PSSM project in Honduras, Dan worked as an Operations Manager in Sri Lanka. In 2019 Dan returned home to study a Master’s Degree in Human Rights Law at the University of Edinburgh before rejoining HALO a year later as Deputy Programme Manager in Angola. Prior to HALO, Dan spent five years in Bogotá, Colombia as an English teacher with the British Council.

Toni joined HALO in 2002 soon after the civil war ended and when his home province of Kuando Kubango was in dire need of emergency mine clearance assistance. Toni was initially responsible for administrative and logistics support to demining operations in Mavinga, a remote town where ex-combatants were quartering for demobilisation, and many tens of thousands of refugees were making their journey home. Since then, demining operations in Kuando Kubango have grown significantly and, as Location Manager, Toni is responsible for the day to day management of the programme’s largest contingent, including demining around the densely mined town of Cuito Cuanavale.

Aurelio joined HALO in 1998 as a deminer, and during the course of his career has worked in demining, survey, mechanical clearance, and road threat reduction. He spent time on the Mozambique programme and returned to Angola in 2003 to serve as Provincial Operations Manager. He was Location Manager for Huambo province from 2009-2016, and led the Mine Impact Free District Survey in Huambo from 2012 to 2014, visiting areas where HALO clearance had been completed ensuring that there was no remaining mine threat. In 2016 Aurelio became Headquarters Manager located in Huambo Province and is now also closely involved with Physical Security and Stockpile Management (PSSM) supporting projects with the Angolan military and national police.

Valdemar joined HALO in 1997 as a deminer and was quickly promoted. After a term as Provincial Operations Manager in Huambo he took over as Location Manager in the province and oversaw clearance operations during the busy period following the end of the war in 2002. After further mine clearance and management training with HALO in Cambodia, Valdemar became HALO Programme Operations Manager in 2007. He manages operational deployments across the programme and oversees all operational training. 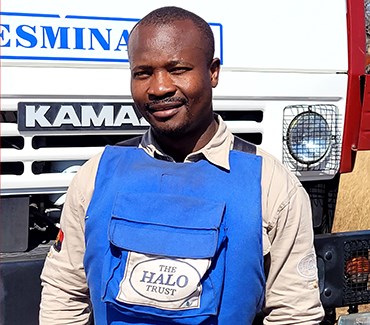 Ramadane joined HALO in 2006 in Cabo Delgado in northern Mozambique. In 2007 HALO began clearance operations to the south and then centre of the country. During this time, Ramadane held various positions in the organisation, from driver, demining team supervisor, training officer and logistics officer. Mozambique was declared landmine free in 2015, Ramadane continued with administrative work for HALO until the end of 2020, when the programme was officially closed. In 2021, he joined the HALO Angola team where he currently works as field officer in the municipality of Cuito Cuanavale. 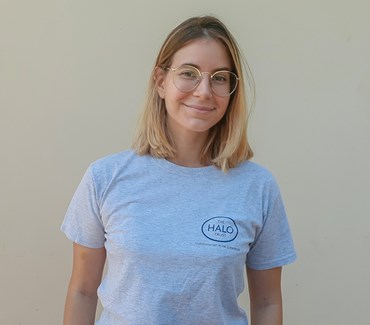 Claire joined HALO in 2017 and completed operations management training in Cambodia, Sri Lanka and Georgia. Claire spent a couple of years working in Afghanistan before joining the Angola programme in 2020, first as Benguela Location Manager then as GoA Project Manager. She is IMAS EOD Level 3 and HIEDD Level 3 qualified and holds a BA in War studies from King’s College London. Claire hails from the beautiful French Basque Country and is half-French, half-Welsh. 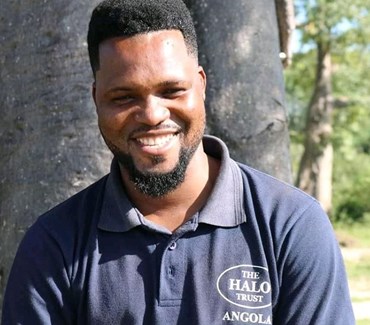 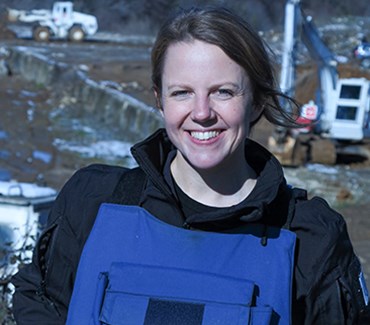 Sian joined HALO in February 2020, completing operations management training in Cambodia and Abkhazia before beginning her first posting in Abkhazia overseeing EOD and mechanical clearance of a site of an ammunition store explosion. Since then she has worked for HALO in Armenia and Nagorno Karabakh before starting her position as part of the Angola programme team. Sian has a background in conflict resolution and mediation and has worked in the Middle East and East Africa. Sian is IMAS EOD level 3 trained and holds an LL.M in Public International and EU Law. 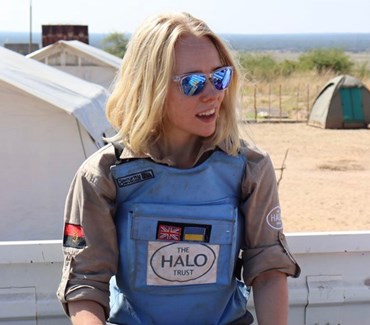 Laura joined HALO in 2021, passing her operations training in Ukraine before beginning her current role as Field Officer in Kuando Kubango. She holds a Bachelor’s degree in English & French from the University of Oxford, and outside of working hours is studying for her Master’s Degree in International Affairs with Kings College London. 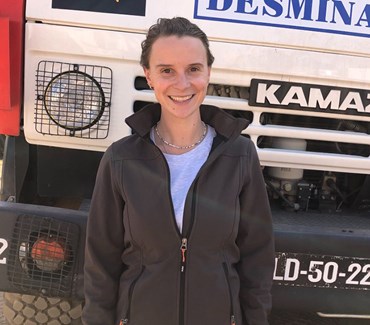 Amy joined HALO in 2021 attending operational training in Ukraine and Cambodia. Angola is her first deployment, joining the team in 2022 as a Field Officer. Before HALO Amy worked in advertising as an account director, as well as working in the humanitarian sector in Sierra Leone. During COVID-19 she spent time as a carer in London. She has a degree in Archaeology and Anthropology from the University of Bristol. 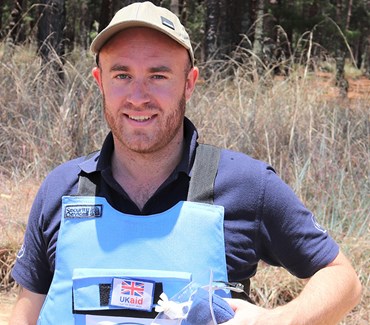 Dan is currently employed as the HALO Angola Programme Officer, having joined HALO in 2020. He is responsible for donor reporting functions for 18 donor contracts, as well as communications, monitoring, evaluation and research. He holds an MA in Security and International Law, and a BSc in International Disaster Management and Humanitarian Response, from the Humanitarian and Conflict Response Institute (HCRI) at the University of Manchester. Dan has an eclectic professional portfolio, including management, research and training roles, as well as many years as a tour guide spent pushing people up and down a river with a stick. 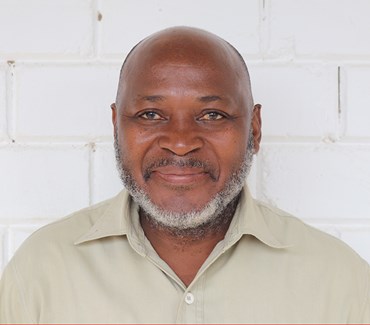 Papel is HALO Angola’s WAM/EOD Officer, and is one of the programme’s longest-serving staff members. He joined HALO in 2000 as a driver, and had progressed through manual and mechanical demining teams, to minefield supervisor (2003), survey and EOD supervisor (2004), WAD supervisor (2006-2009) and from 2009 has held the position of WAD and EOD operations officer for the programme. 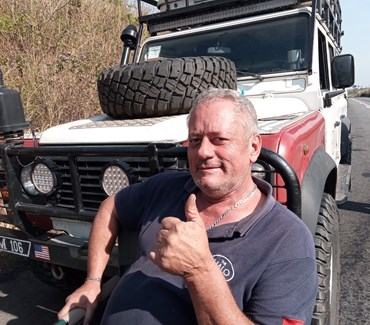 ‘Cobus’ joined HALO in November 2021. He has over 16 years’ experience working across Africa, including Mozambique, Gambia, DRC, Nigeria and Sierra Leone as a technical workshop manager. Cobus is originally from South Africa, where he studied, completing various diplomas in mechanical engineering, quality management, health and safety policy and procedure. He has worked in mining, road construction and development programmes and is registered with the council for quality practitioners as LCRQP/ ACRQP.