Prince Harry, Patron of The HALO Trust's 25th Anniversary Appeal, is on a private visit to HALO's mine clearance programme in Angola.

Prince Harry previously visited HALO in Mozambique in June 2010 where he saw HALO’s mine clearance teams working in communities adjacent to the Cahora Bassa Dam in Tete province. During this visit Prince Harry learnt how to locate and destroy mines, met victims, and saw the benefits of mine clearance.

Prince Harry is also visiting the town of Cuito Cuanavale during this visit to Angola. Cuito Cuanavale (population 43,000) is believed to be Africa’s most mined town and is located in the very south of Angola in an extremely remote location. It was a site that was heavily defended and attacked during Angola’s civil war that involved outside military forces. Dense minefields were laid in concentric panels fanning out from the centre of the town by opposing sides to stop infantry and armoured attack and counter-attack. The density of the mines laid were so high that penetrating the belts was near impossible and the town therefore became a major flash point in southern Angola. It was this town and the fighting that occurred around it which played a major factor in the final outcome of the war and the Government of Angola’s ultimate victory. Some 3 years after the end of the civil war, HALO began clearance in the town. HALO has been conducting clearance ever since with over 21,300 anti-personnel and anti-tank mines located and destroyed so far. HALO has cleared those minefields closest to the town centre and is now pushing out to reach those further afield. Clearance is saving lives, preventing accidents, and allowing the population to use their land productively and without fear but there is still more work to be done.

Prince Harry is visiting a number of demining teams across the region and will be touring minefields and meeting with beneficiaries of HALO's work.

The HALO Trust is an international demining organisation that has been working in Angola since 1994. HALO currently employs over 650 Angolan staff making it the largest international humanitarian mine clearance operator in-country.

HALO started work in Angola to assist with the urgent humanitarian need to clear mines and explosive remnants of war left as a result of the civil war. Activities have been prioritised and focused on those communities with the highest need in order to save lives, prevent injury, and to encourage development by restoring safe access to land and infrastructure.

HALO’s demining activities are focused in four of Angola’s eighteen provinces – Benguela, Bié, Huambo, Kuando Kubango. HALO also assisted the government with minefield survey in Huila province in 2009. HALO is also the implementing partner of the national disarmament campaign across all of Angola’s provinces.

HALO receives support for its work in Angola from the international donor community, and more recently, from the Angolan Government.

Much of HALO’s historical mine clearance has allowed selected provincial capitals to rebuild their schools, roads, hospitals, churches, markets and homes. It has also allowed the infrastructure that links and supports these capitals to be re-built including roads, railways, airports, bridges, dams and electricity pylons. This work has allowed Angolans not only the chance to return to a level of normalcy, but to flourish in a safe environment.

In addition, HALO has opened or cleared over 7,300 km of road, using pioneering systems devised in 2002 to assist aid agencies that were constrained in their ability to reach communities and deliver aid because of large numbers of anti-tank mines. An anti-tank mine has been found along roads, on average, every 26km.

In 2005, HALO started a Weapons and Ammunition Disposal (WAD) programme. Mobile teams have supported the Angolan military and police nationwide to destroy unwanted ammunition stocks and weapons, and have acted as the official implementers of the Government of Angola’s National Disarmament Campaign. HALO WAD teams have cut over 104,000 weapons, destroyed over 2 million bullets, and destroyed over 1,200 tons of unwanted ammunition.

HALO’s mine clearance is increasingly focused on more rural areas, away from provincial centres. It is aimed at allowing land to be returned for safe and productive use principally for cropping, grazing, house building and safe access. On average 11 families benefit directly, and 59 families benefit indirectly from each hectare of land cleared.

HALO is deploying the majority of its demining assets in Kuando Kubango province, followed by Bié, Benguela and Huambo, commensurate with humanitarian need and the scale of the remaining problem in each province.

HALO is making excellent progress in Angola with the province of Huambo now close to becoming mine-impact free, but there are still many years of work to be done. With support from Angola and the international community, HALO will continue to work towards a mine and explosive remnants of war free Angola for the benefit of the Angolan people.

Guy Willoughby, who is travelling with Prince Harry, will be available for comment/interviews upon his return to the UK on 16 August 2013. 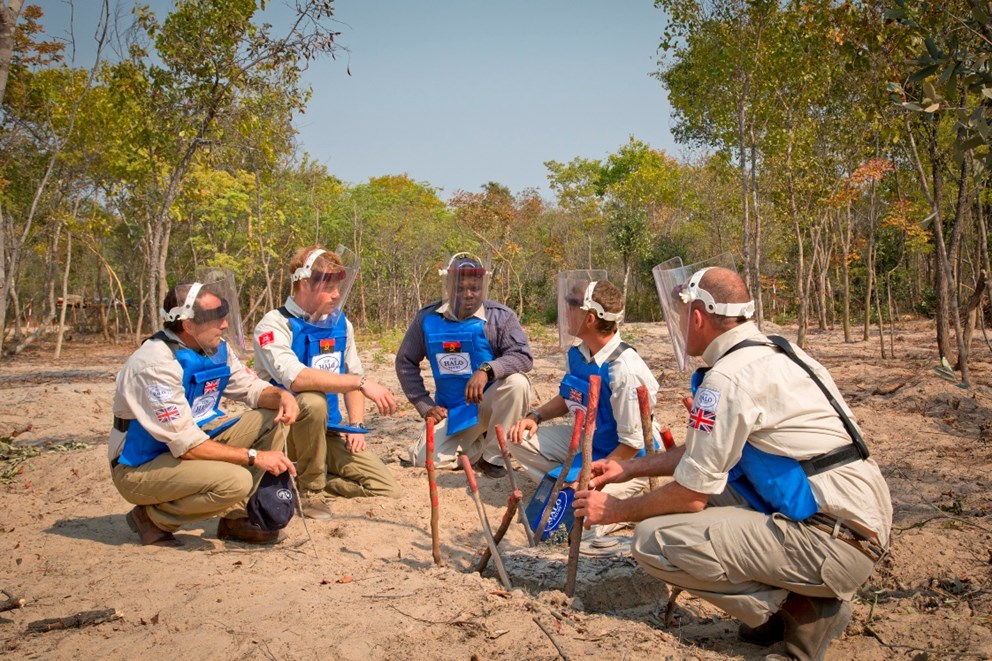