See the difference you made to families across Karabakh.
Learn More

Nagorno Karabakh is a remote and beautiful place in the South Caucasus, a land of forest and mountains. However, its people have been haunted by the presence of landmines for more than two decades as a result of the 1988-94 Nagorno Karabakh War. In fact, there have been more landmine accidents per capita in Karabakh than anywhere else in the world. A quarter of the victims are children.

Like Oksen Baghdasaryan, most Karabakhis living in mined areas are dependent on agricultural land or woodland to support their families.

“I am the only resident left in the village. Fourteen families with twenty children lived here, but they moved to other villages where development is possible without the landmines.”

Since 2000, HALO has cleared almost 500 minefields in Nagorno Karabakh, making land safe and transforming the lives of more than 130,000 people. We visit schools and communities to teach people, especially children, how to stay safe until all the landmines are gone.

But landmines are not the only challenge. On the 27 September 2020, the worst fighting in decades erupted over Nagorno Karabakh, with many families forced to flee their homes. A ceasefire was agreed on 9th November but homes, streets and gardens were left strewn with explosives. HALO's focus now in Karabakh is on clearing cluster munitions and other unexploded ordnance from key population centres such as Stepanakert, Martakert and Martuni. This will ensure the safety of the remaining population and returning displaced families in the coming weeks and months.

OUR IMPACT
“When you’re clearing mines, I know you’re not clearing it just for people like me, but for the whole community. It’s a powerful mission that you’re carrying out here, and it means safety for my kids, for their kids, for all of Karabakh.”

Mikhail Merjumian, who lost his leg in a landmine accident, is now benefitting from safe access to cleared land. He loves to have his two granddaughters, Ani and Ana, to come and stay. Previously, he always had to warn them to stay away from the minefield. Now, like the children from the local school, they can play freely and safely. 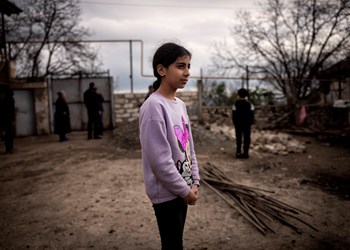 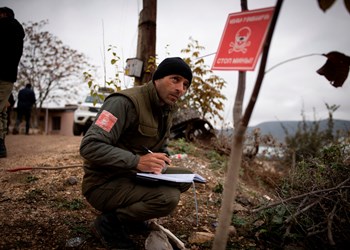 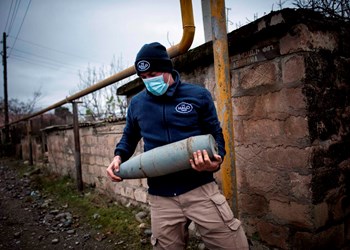 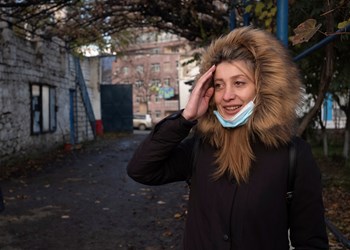 From Minefield to Hospital
Read more 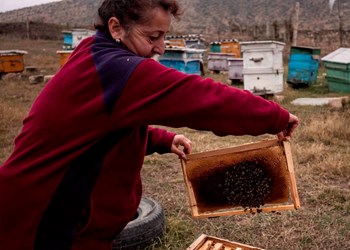