Sri Lanka’s Civil War, which ended in 2009, claimed the lives of around 80,000 people. Hundreds of thousands were forced to flee their homes, either because of fighting or because landmines made it too dangerous for them to stay. According to Landmine Monitor, over 20,000 people have been killed or injured by landmines and other explosives.

Even ten years on from the end of the war, many families still cannot return home because their land is not safe. Much progress has been made to clear the landmines but there is still work to be done if Sri Lanka is to become ‘mine free.' Sasilika lost her right leg to a landmine during the war and dreams of a Sri Lanka free of landmines so she doesn’t have to fear for the future of her two young children.

“It doesn’t matter about me losing my limbs because I am older and have lived my life. But if a child had a mine accident it would be a disaster.”

HALO is the largest landmine clearance organisation in Sri Lanka, with almost 800 staff. 40 per cent of our deminers are women, many of them previously displaced or war widows with children to support.

Our efforts are focused on helping Sri Lanka become mine-free, by clearing landmines and other explosives in the Jaffna peninsula, Kilinochchi and Mullaitivu. We also visit schools and communities to teach people how to stay safe until all the landmines are gone. We are aiming to support over 48,000 Sri Lankans to rebuild their lives over the next two years. A third of these need their land to be made safe before they can return.

Rishika is five years old. She is pictured here with her class at St Thoma Church, which is used as a primary school during the week. The catholic church was built on land cleared by HALO and the school now has 34 boys and girls on the roll, able to learn and play safely. 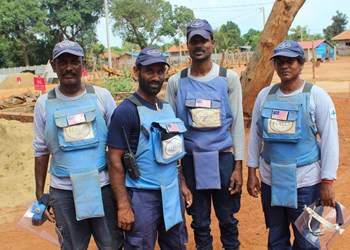 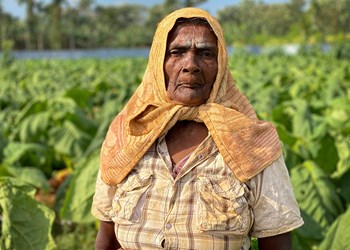 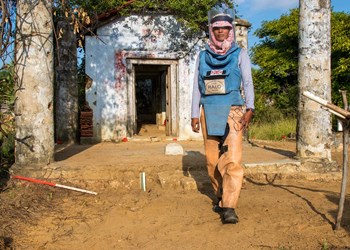 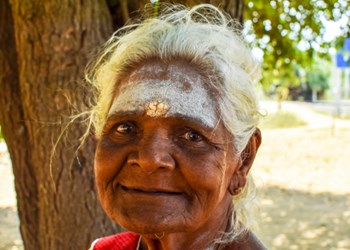 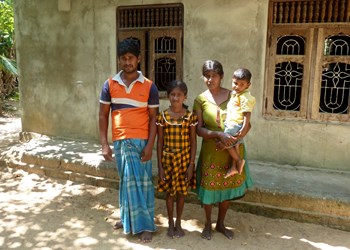 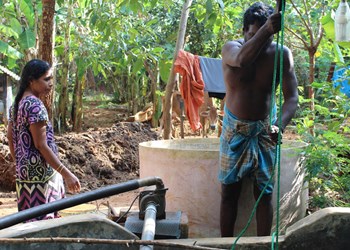 Sign up
Our work in Sri Lanka is funded by:
The United States Government
The Government of Canada
The EU's Instrument Contributing to Peace & Stability
German Federal Foreign Office
The Government of Japan
Norwegian Ministry of Foreign Affairs
Confederation Suisse
The UK Government

Meet our team in Sri Lanka

Eleanor joined HALO in September 2017, completing operations management training in Cambodia, Sri Lanka, Georgia and Abkhazia where she gained her IMAS EOD3 qualification. She spent the next three years on operations postings in Cambodia, as Location Manager and Operations Manager, responsible for over 850 operations staff. In December 2020, Eleanor was promoted to the position of Programme Manager in Sri Lanka. Prior to HALO, Eleanor worked as a project manager for a U.K. based youth educational charity and for an international engineering company.

Gueman joined HALO in 2003 and is HALO Sri Lanka’s senior manager for mechanical mine clearance. His job involves the management of a fleet of armoured clearance assets including front loaders, excavators and flail machines, and the training and deployment of mechanical operators. He has spent time on HALO’s Afghanistan programme and assisted with training mechanical operators in West Bank.

Emily completed Operations training in Cambodia before taking on Operations Officer roles in Somaliland and Colombia. After completing her IMAS EOD3 in Abkhazia, she returned to Colombia and took up the role of Location Manager, subsequently overseeing completion of operations in the department of Tolima. She joined the Sri Lanka program in September 2019 as Operations Manager. Before HALO, she worked in emergency response and maritime Search and Rescue, responding to the refugee flow into Europe. She is a qualified International Mountain Leader and holds an MSc from Durham University in Defence, Development and Diplomacy.

Mary is a trained accountant and joined HALO’s Jaffna office in 2006. Quickly promoted to Finance Officer, she was appointed Programme Finance Manager in 2012. She provides oversight of financial and management throughout the programme and is responsible for reporting financial accounts to the head office in Scotland, managing multi-donor accounts and ensuring compliance with individual donor reporting requirements.

Raj joined HALO in 2010 with experience of planning and administration in both the commercial and NGO sectors. As Office Manager, he supervises all support staff teams handling fleet, logistics, IT, personnel and property management. He is trained in accountancy and computer studies.

Pirashanthan (KP) joined HALO Sri Lanka as Radio Operator in 2007 and was soon promoted to Database & GIS Officer. KP is trained in GIS, demining, non-technical survey, paramedic skills and explosive ordnance disposal. From 2010 to 2015, KP managed HALO’s Survey Teams. He currently manages HALO’s GIS and Community Liaison teams to ensure accurate clearance mapping, data entry and is responsible for liaison with national authorities. KP is studying for a BTEC HND in IT. He has completed IMSMA MIQ Administrator  Level 1 and the Regional Senior Managers’ Course with CISR JMU in Tajikistan.

Sutharsan joined HALO in February 2011 as an Assistant Chief Medic, who has promoted as a Chief Medical Officer on April 2012. In the Sri Lanka programme, he trained more than 800 paramedics. He is supporting to the programme all the medical relative matters. He is experienced in the medical and trauma management during conflict of Sri Lanka.

Lalita joined HALO in 2019. She completed Operations Management training in Cambodia, Somaliland, Nagorno Karabakh and Kosovo. After obtaining her IMAS EOD3, she joined the Sri Lankan team in 2020 as Operations Officer. Prior to HALO, Lalita worked for various international affairs organisations, predominantly in the Middle East and Africa, having studied Law and Humanitarian Affairs.

Elias joined HALO in 2020 as a Procurement & Compliance Officer. His background is mainly in the military where he worked both as a soldier and a civilian. As a civilian he worked as a controller, tasked primarily with the budget cycle, and compliance to internal rules and legal frameworks.