The five-day war between Georgia and Russia in August 2008 left Georgia with a dangerous legacy of cluster bombs, landmines and other explosives. Hundreds of people died and over 150,000 were forced to flee their homes.

Shida Kartli, one of the country’s most productive agricultural areas, was badly affected. Families, unable to farm their land, were plunged into poverty. 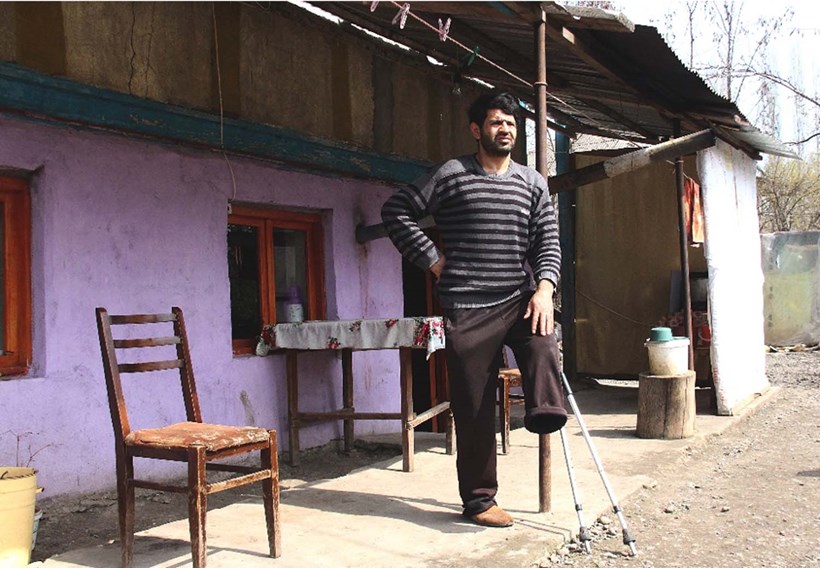 Serkan was injured
at Red Bridge

By the end of 2009, HALO had cleared Shida Kartli, so people could return home and cultivate their land again. Since then, we have cleared thousands of hectares of land in Georgia, including a minefield near a former Soviet military base. The area is now the site of a reservoir which will supply fresh water to the 147,000 inhabitants of Kutaisi when it is completed.

There are still six minefields to clear in Georgia. Chief among them is Red Bridge, where 13 people have been killed and four injured, including Serkan Musaev. He was helping his friend look for lost cattle when he stepped on a landmine, losing his right leg. We are urgently seeking the permissions needed to clear Red Bridge, so more lives are not put at risk.

Near the village of Chonto, our team discovered 30 huge aircraft bombs amongst the wreckage of a plane shot down during the Russian-Georgian war. They were in a highly unstable state, threatening the lives of local families. Overcoming the challenging mountainous terrain, we carefully destroyed the bombs, ensuring a safe future for the people of Chonto.

The war of 1992-3 resulted in tens of thousands of landmines being laid across Abkhazia. For 14 years HALO worked to make land safe until, in 2011, Abkhazia was declared landmine free.

But a hidden danger remained. It emerged that, during the fighting, people were keeping salvaged explosives in their homes in order to sell the valuable metal for scrap. Alick Azhiba contacted us when he feared a landmine he had hidden during the war now posed a risk to his two young girls. We found it buried beneath the floor, directly below the cot of one-year-old Anastasia.

Decades after the war ended, these unexploded items—in homes and ammunition stores—continue to threaten lives. In 2017, a military ammunition store close to the village of Primorsky, exploded, killing three people. Explosives were scattered across the village, putting thousands of people like Jambul at risk.

The Primorsky explosion
“It was hell here. After the first explosion, there was an explosion every two minutes. I evacuated my family and everybody I could reach. Just here in my field, there were 30 – 40 unexploded bombs.”

HALO works to build trust with local communities in order to locate and destroy explosives safely. We oversee the Abkhazia Mine Action Office, which keeps detailed reports and maps of areas that have been made safe—a vital resource for anyone developing the land. We also support development by repairing damaged roads and bridges in rural areas, to prevent people getting cut off from essential services such as schools, doctors and markets.

Two years on from the explosion at Primorsky, we have cleared people’s homes, fields and gardens so families can rebuild their lives. We will continue to work until the surrounding land is safe. 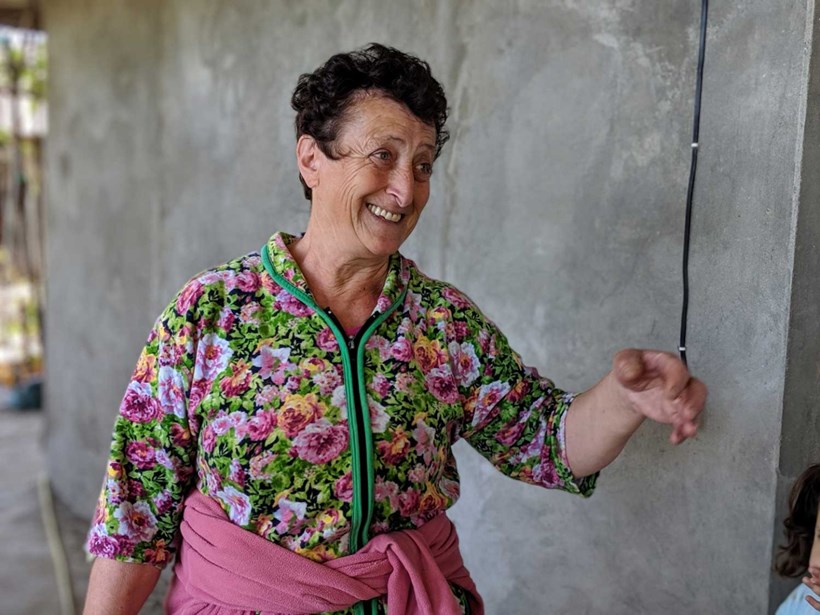 OUR IMPACT
“I was very worried about my grandchildren. We did not go into the garden until HALO had made it safe. If someone found a dangerous item, HALO would come and take it away. I would like to thank everyone at HALO who cared about us.”

Elena and her grandchildren will never forget the day that explosives rained down on Primorsky, when a nearby ammunition store exploded. But for the past two years, HALO has worked to clear the thousands of explosives that covered the village, so that families can begin to recover. 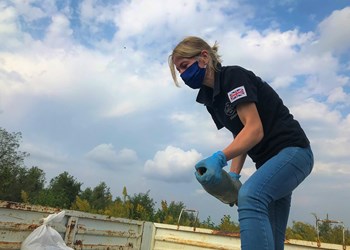 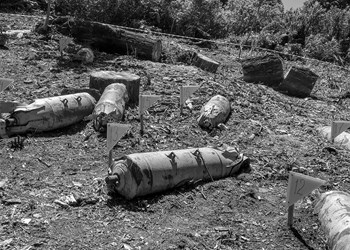 A harvest of bombs
Read more 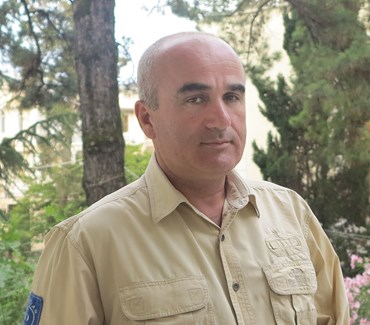 Esmet graduated as a civil engineer in Ukraine in 1993. He joined HALO in 1998 as a Field Officer, soon after becoming a demining supervisor and took part in the initial survey of Abkhazia during 1999 and 2001. From 2001-2004 he served as a Location Manager, then as Deputy Programme Manager from 2004-2007. In 2007 Esmet became the Programme Manager. In addition to mine clearance, in 2012, HALO started road and bridge rehabilitation projects where Esmet leads as a construction engineer. 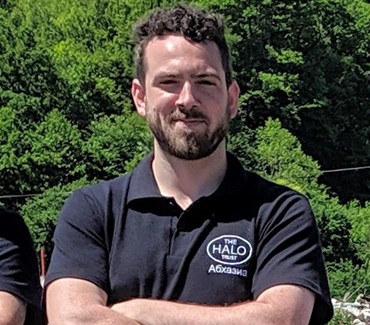 Michael Montafi joined The HALO Trust in 2019 as a Programme Officer and now leads fundraising and liaison activities for HALO’s programmes based in Tbilisi and Sukhumi. Prior to joining HALO, Michael spent five years working on human security and development issues in Azerbaijan and Georgia. Michael holds an MA from the Graduate Institute of International and Development Studies in Geneva (IHEID). 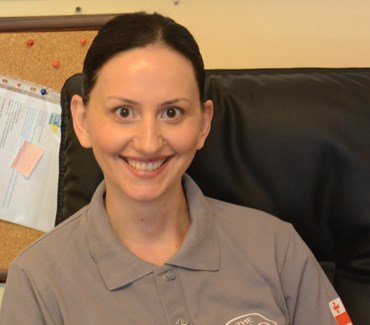 Natia began working for HALO in 2003. Between 2003 and 2005, then 2008 to 2009, she conducted explosive ordnance risk education (EORE) focusing on the areas around Soviet military bases in different regions of Georgia, and in the Shida Kartli region, which was affected by cluster munitions from the Russian-Georgian war. She returned in 2017 as Finance Officer and again in 2021 as Programme Administrator, where she is responsible for all support functions, including finance and logistics. 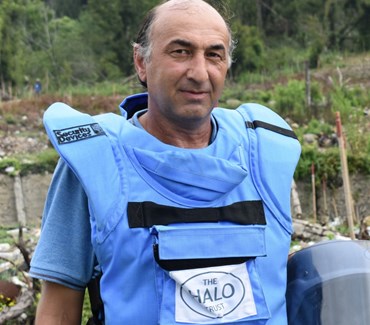 Daur is from the village of Mgudzyrhua, Gudauta district. A former police officer in Gudauta, Daur joined HALO in 1997 as a Deminer, and has worked his way up to become one of our highly experienced EOD specialists. He currently oversees all clearance operations of the Primorsky munitions store explosion site. Daur is married with two sons. 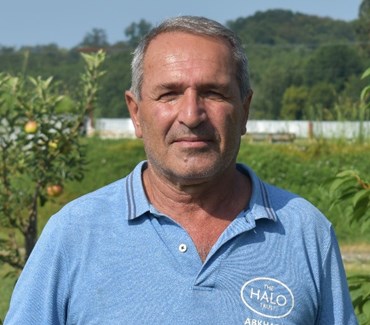 Otar comes from the village of Tkhina, Ochamchira district. In 1993, after graduating from Polytechnic College in Tbilisi, Otar joined HALO as a Deminer. After completing demining service as a Team Leader, he successfully completed EOD specialist training in 2007 and was promoted to his current position as EOD Team Leader. Otar leads on all EOD call-outs in the Sukhumi region and on bulk demolitions of items recovered from the Primorsky ammunition store explosion. During his time working with HALO, Otar holds the record for destroying the most mines and UXO in the programme: over 50,000 items to date. He is married and has two sons.

Mamuka is the programme’s longest standing employee, having served since it began in 1997. He joined initially as a Deminer, before his promotion to Team Leader in 2001. Mamuka then completed EOD specialist training in HALO’s Nagorno Karabakh programme. Since 2013, he has been an EOD Team Leader, leading HALO’s EOD team based in Gali. Mamuka holds a degree in Agriculture from the University of Zugdidi in Georgia. He is married with three children. 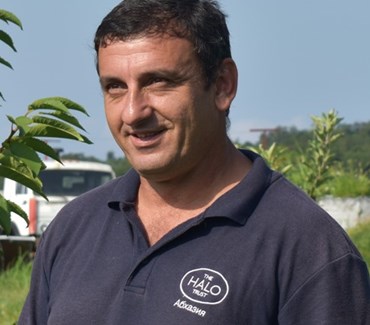 After serving for several years in the military, Temur joined HALO, initially as a Deminer then being promoted to the position of Team Leader. In 2011 he completed EOD specialist training on HALO’s Nagorno Karabakh programme. Temur has also provided specialist support to the ICRC in the recovery of the human remains from the 1992-1993 conflict. Temur and his wife have one daughter and live in the village of Oshera. 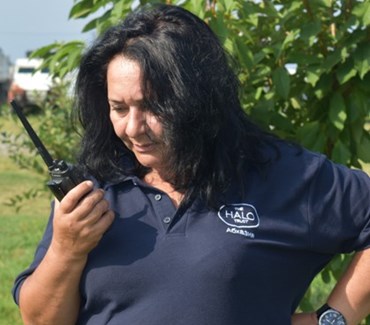 Larisa comes from the town of Ochamchira and gained extensive experience as a paramedic during the 1992-1993 conflict. From 1997- 2012 she worked for HALO as a medic. In 2018, in the aftermath of the Primorsky munition store explosion, she re-joined HALO taking on the role of Chief Medic. Larisa coordinates and delivers all paramedic training for current and new Paramedic Deminers and oversees all of the programme’s casualty evacuation exercises. Larisa is married and has one son. 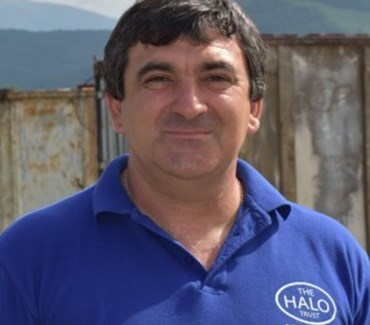 Alias joined HALO in 2002, working initially as a Deminer, then cartographer before being promoted in 2003 to Logistics Manager. He coordinates all the logistical and fleet support for the entire programme. Prior to working for HALO, Alias was a secondary school maths teacher and holds a degree in mathematics. He is from the Ochamchira region and is married with two sons.