HALO's work at the nexus of conflict, climate change and conservation

It has been widely acknowledged that unchecked climate change is likely to be a driver of future wars and conflict. Less well understood is the extent to which past and current conflicts are themselves making climate change more likely and acting as a serious brake to conservation work.

The best illustration of the link is to be found in the far southeast of Angola. A sparsely-populated wilderness, with the capacity to be one of the planet's great wilderness areas, southeastern Angola is also the fifth-largest carbon sink on the planet. The area is also the home to the headwaters that feed the Okavango Delta - home to 50 per cent of Africa's elephants.

“We have made some incredible discoveries, including 30 new species to science. None of this would have been possible without the help of The HALO Trust.”

The presence of landmines in the headwaters of the Okavango makes large areas a lethal habitat for both animals and local people. The mines prevent conservation measures and drive impoverished communities to poaching and logging activities that threaten the health of the fifth-largest carbon sink on the planet.

Making the area safe from landmines will not only protect the region’s vital biodiversity but also help Angola to develop a conservation-based tourism economy that provides sustainable jobs.

In a ground-breaking first step, the Angolan government is spending $60 million to clear minefields in two national parks. HALO aims to match this funding and, with support from foundations, philanthropists and corporations, clear landmines from the entire watershed that feeds the Okavango Delta. At a speech at Chatham House in 2019, Prince Harry pledged his support to HALO’s ground-breaking project to clear the landmines and protect the Okavango headwaters so that wildlife can return.

Minefields and national parks in the Okavango watershed
Read More

Learn how we are partnering with conservationists and environmental experts to advance ecological protection and conservation in the world’s most vulnerable places.
Learn more

Combining mine clearance & environmental development by destroying landmines and working with Candlelight to restore ecosystems and rebuild livelihoods in Somaliland. Watch the film:

From landmines to crops; clearing minefields, restoring ecosystems and rebuilding livelihoods in the Horn of Africa.
READ MORE
Conservation Stories
The Land at the End of the Earth
Watch now
Chatham House: Landmines & Conservation
Watch now 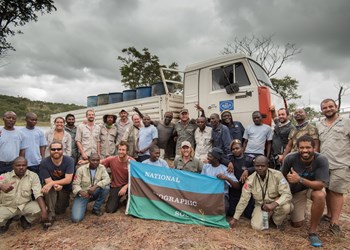