Making history at the Baptism Site

For over 50 years the churches at the Baptism Site were cut off by landmines. HALO has now made them safe.
Watch Video

For Christians worldwide, the Site of the Baptism of Christ on the River Jordan is one of their faith’s holiest places. For hundreds of thousands of pilgrims and tourists it is a crucial part of any visit to the Holy Land. But for over 50 years it was also a vast minefield.

After the Six Day War in 1967, the border between the West Bank and Jordan was heavily mined. This included the churches and compounds of eight Christian denominations at the site of the Baptism of Christ at a place known as Qaser al-Yahud. For over five decades no worshippers could enter the churches and the clergy had to stay away as their buildings decayed.

"In a region troubled by division, clearing landmines at this holy site is a rare symbol of hope and reconciliation. "

In 2016, HALO secured the approval of the Israelis, Palestinians and all the churches to clear landmines at Qaser al-Yahud. The Roman Catholic Church and seven Eastern churches—Armenian, Coptic, Ethiopian, Greek, Romanian, Syrian and Russian—have churches or land on the minefield.

HALO launched a global fundraising campaign to support the clearance and, with donations from church leaders, philanthropists, congregations and the Israeli President’s office, was able to start clearance work in March 2018.

THE FRANCISCAN CHURCH
"Landmines mean a field of war and if the mines are cleared, it becomes a field of peace."

In October 2018, HALO deminers were the first people to enter the Franciscan Church in over 50 years. Inside they discovered a fascinating insight into the daily lives of the priests—crockery, food and religious artefacts frozen in time. Once the church was made safe, Fr. Francesco Patten was able to visit, the first clergyman to set foot here since the priests were forced to flee during the 1967 Six Day War.

A SPECIAL PLACE
FOR ALL OF HUMANITY

In April 2020, after four years of work we completed the clearance of the Baptism site, an area the size of 56 football pitches. On 23rd April the land was handed back to the churches, which will now be refurbished to serve the hundreds of thousands of pilgrims who visit the Baptism Site each year. 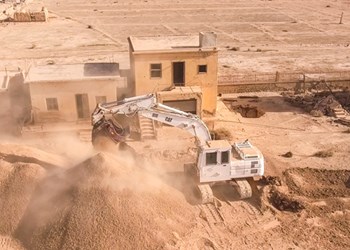