In addition to the £46 million of UK Aid announced by the government to protect up to 1 million people from landmines across Asia and Africa, UK Aid is already supporting mine clearance in Afghanistan. HALO has received funding from the UK Government since 1993 —transforming lives in hundreds of communities, including Sayelau village in Baghlan province.

Nestled among the mountains of Northern Afghanistan is Sayelau village, the ancestral home of the Sayel tribe. Fakhrudin, father to six sons and one daughter, is the village deputy. Although the tribe has lived here for 200 years, Fakhrudin and his family were forced to flee in 1995, as the village became caught in the crossfire of fighting. It was ten long years before they could return but their homecoming did not bring the happiness they anticipated.

“What greeted us on our return were not friends and family, but landmines and unexploded items.” Fakhrudin, Sayelau village, Afghanistan

The villager’s homes were surrounded by landmines and explosives. Fakhrudin was unable to fetch water from the nearby stream to irrigate his crops and his wife and children could not collect herbs or take the animals to graze. The danger was ever-present, six people were hurt by landmines buried around Sayelau, including Fakhrudin. The severity of his injuries meant he couldn’t work for a year and he was forced to borrow money and food from his neighbours in order to survive.

With funding from the UK Department from International Development, HALO cleared the landmines from around the village. Local residents immediately began using the land to graze livestock and cultivate wheat. 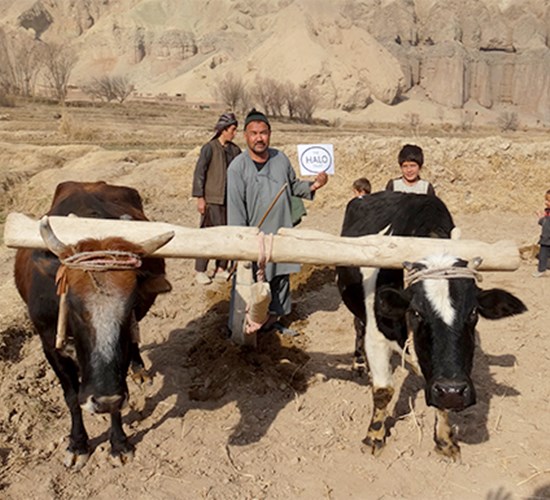 “Everybody in the village benefits from the land that is now cleared, either for firewood, grazing or collecting herbs. Now that access to the area is safer, we hope that we will finally be able to build a school and a clinic.”

For Fakhrudin, making the area safe has transformed the outlook for his family.

“The most important outcome for me is that my family is now safe. We can grow wheat and we have achieved an amazing harvest this year: 700kg of wheat!”

Sayelau village is one of many communities across Afghanistan where the presence of landmines has hindered development. By removing the mines, the land can be put back to productive use and families and villages begin to rebuild.With funding from UK Aid, HALO will continue to work with the people of Afghanistan to achieve a mine-free future in partnership with Afghanistan’s Department of Mine Action Coordination and the United Nations Mine Action Service.