Conservation and Mine Clearance
One year on

On the 27th September 2019, Prince Harry visited HALO’s programme in Angola where he destroyed the first landmine in a $60 million project to clear mines from two national parks. The visit marked the start of an initiative that will help safeguard one of Africa's last great wilderness areas.

“Clearing the minefields in southeast Angola will help protect human life. Moreover it is the first step in allowing local communities to protect wildlife with the kind of conservation-led development that has been so crucial elsewhere on the continent.”

The Duke of Sussex, Dirico, Angola

In the year since, HALO has cleared the three minefields around the town of Dirico that was visited by Prince Harry and has begun the process of training its staff as supervisors so they can oversee a large growth in deminers to clear mines from the Longa-Mavinga and Luengue-Luiana national parks in Cuando Cubango Province.

In addition to the Government of Angola's funding to clear the two national parks, HALO is engaging with private donors, corporations and foundations who can support the clearance of the wider watershed that feeds the Okavango Delta and Kavango Transfrontier Conservation Area (KAZA TFCA). 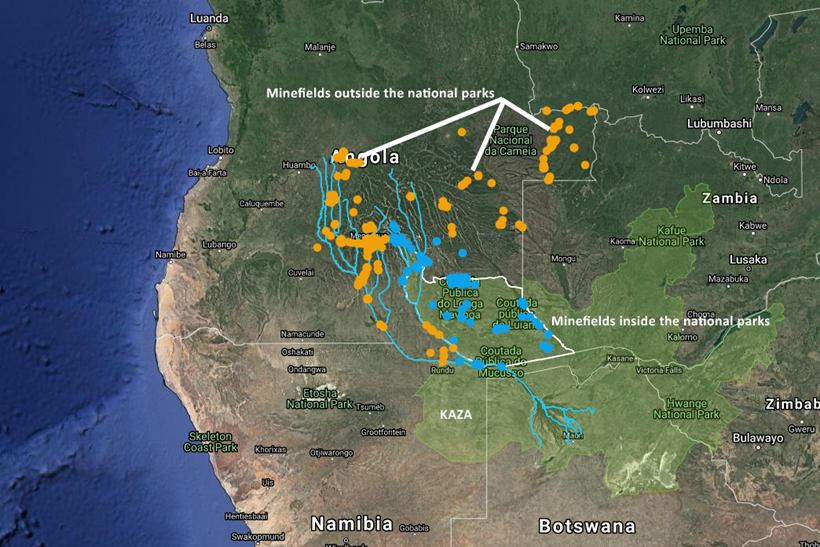 To meet the needs of this ambitious project, we have been recruiting and training local men and women to clear the landmines across southeast Angola, providing opportunities in a region where jobs are scarce. This will triple our number of Angolan staff to over 1,200 men and women in the next year or so. HALO plans will see 40-50 newly trained deminers qualify every month for ten months. This will not only meet the needs for clearing the national parks, but will provide for the expansion being funded by donors such as the US State Department, BP and the UK Government.

HALO is starting work to clear three minefields around the isolated settlement of Longa, where the mines restrict the safe access of the community to water. HALO has also undertaken survey work around the community of Tempué near the source lakes that feed the watershed.

HALO's partner, the National Geographic Okavango Wilderness Project, is working on plans and permission to build a research, conservation education and training centre close to the village of Tempué. This “Conservation Development Node” will include researcher accommodation, basic healthcare facilities, tree nurseries, and conservation agriculture test plots to support local food security. In addition the Project plans to refurbish the Tempué clinic and town hall which will be used as a an additional training centre to the project’s efforts to build local capacity.

HALO has undertaken surveys of the site and will complete clearance around the airstrip and village before construction begins.

HALO's involvement dates to 2015, when the National Geographic Okavango Wilderness Project (NGOWP) launched the “Source to Sand” Megatransect of the entire length of the Okavango river from the source of the Cuito River. HALO has continued its work with the project as it strives to protect the Okavango River Basin for future generations. Reaching the headwaters of the river basin and conducting scientific and socioeconomic surveys for the project meant navigating around the minefields of southeast Angola. HALO was able to step in and provide safe-passage, opening up the region to scientific exploration for the first time in decades.

Today the Okavango Wilderness Project is working with the Angolan government and other local and international conservation charities, including HALO, to convene a community conservation partnership, called the Lisima Watershed Partnership and implemented through Lisima Project (Projecto Lisima).

HALO is proud to continue our partnership with NGOWP supporting the well-being of local people which is a primary factor in making conservation a success: founding principles of the Lisima Project include upholding traditional knowledge systems and land rights, optimizing sustainable traditional and alternative livelihoods, and gathering detailed baseline ecological, biodiversity and socio-economic data to inform conservation decision-making.

"The Lisima Watershed Partnership’s vision is to safeguard the life-giving water flowing into the Okavango and Zambezi rivers from Angola through equitable partnerships. This will be achieved through supporting Projecto Lisima to establish a sustainable, vibrant and community-driven conservation economy."

For all the latest news on this project and HALO's programmes around world, sign up to HALO's e-newsletter.