Mushrooms and mines
Dangers in the forest in Ukraine

“I heard the sound of an explosion and my wife’s scream...Her face was covered in soot.”

Serhii, age 69, and his wife Luba, age 66 walk from their home in Myla to the nearby woods. Route M06 is visible from their flat—the direction of the Russian advancement on Kyiv in March. Next to the treeline is an ancient garden. It’s a place they’ve visited often to pick mushrooms and raspberries and to take their daily exercise. Luba has high blood pressure, so they like to walk as much as possible.

But the forest is now occupied by burnt out Russian tanks. Exploded metal carcasses, body armour ground into the dirt. A stark reminder of the battles fought here just a few months ago. Serhii and Luba are careful. They have only returned to the area recently. On March 3rd their flat took a direct hit from a tank shell, burning out the top two floors of the building, and they were forced to leave. 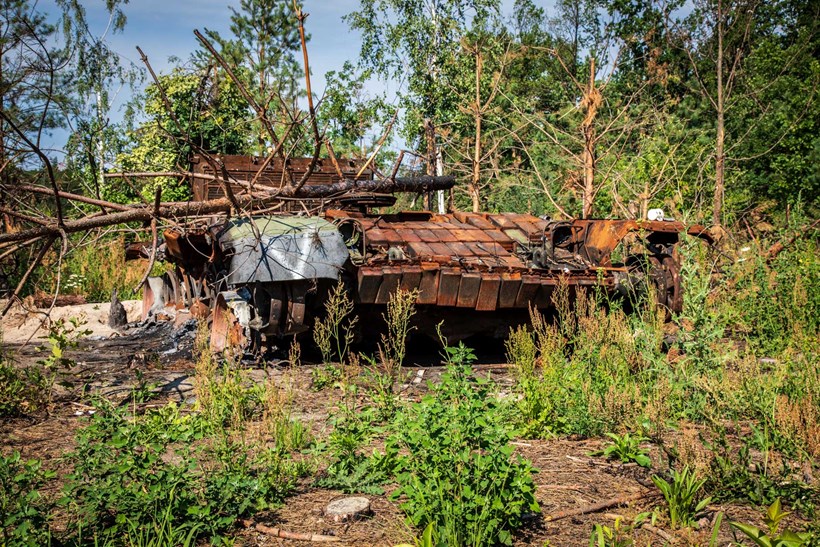 “During the first walks we were very cautious where we went, we watched our steps and we also met people who had walked there before. So by the time the accident happened, we had already visited that place three or four times. On this day it was nearly sunset. It had already started getting dark and we decided to go a little further looking for mushrooms. I was walking along the first row of trees and Luba was behind me. As I walked a bit further, I heard the sound of an explosion and my wife’s scream. I thought she was scared by the explosion so I called out ‘don’t be afraid, I am coming to you.’

I came running and there I saw what had happened to her. She was lying on the ground and her legs below the knee were completely shattered to the bone and she had a 10cm wound across her stomach. She was pressing it with her hand. Her face was covered in soot but she still had her glasses on. I cut the strap from my bag and made a tourniquet and put it on her leg. I didn’t have anything else with me, so I cut my trousers and made a tourniquet for her other leg. I gave her some water to drink. My hands were covered in blood and as I tried to call the emergency services I couldn’t do it the first time. The operator was struggling to locate us so my wife told me to go and meet them.”

Serhii went to fetch the ambulance which was at the edge of the village. But due to the risk that there were further explosives in the area, the paramedics were not able to enter the forest. For an hour Serhii tried desperately to keep Luba alive until the special emergency services could arrive to help them.

“I took a syringe with the blood stopping drug and two tourniquets and ran to my wife, it was almost dark then. She was so brave. I didn’t tell her what had happened to her legs. I told her that help was almost there. I had a small axe with me and I saw that people were afraid to come closer, so I started to cut the branches from the trees to mark a path. I returned to the ambulance and by that time the police had arrived. The policeman and I think someone from the administration took the stretcher, I went in front and they followed at a distance.”

When they arrived, Luba was still conscious. They placed her on the stretcher. As they ran back through the forest, they sang ‘Chervona Kalina’ to her—a traditional Ukrainian song to give her strength. Tragically Luba’s injuries were catastrophic, she had initiated a grenade on a tripwire whilst walking through the grass. She died on the way to hospital.

"She was so brave. I didn’t tell her what had happened to her legs. I told her that help was almost there."

Serhii speaks to us from his temporary home. Out of the window he can see the burnt and shell-marked flat that he shared with Luba since 2014. It’s less than week since she died. He says he feels so guilty he wasn’t more cautious about entering the area. He did not realise how dangerous it was. Serhii takes down the family photo album which he had rescued from their old flat and shows her photos—Luba the bride, with their son and daughter. Instead of clothes on the drying rack, he has laid out yellow flowers to dry for Luba. 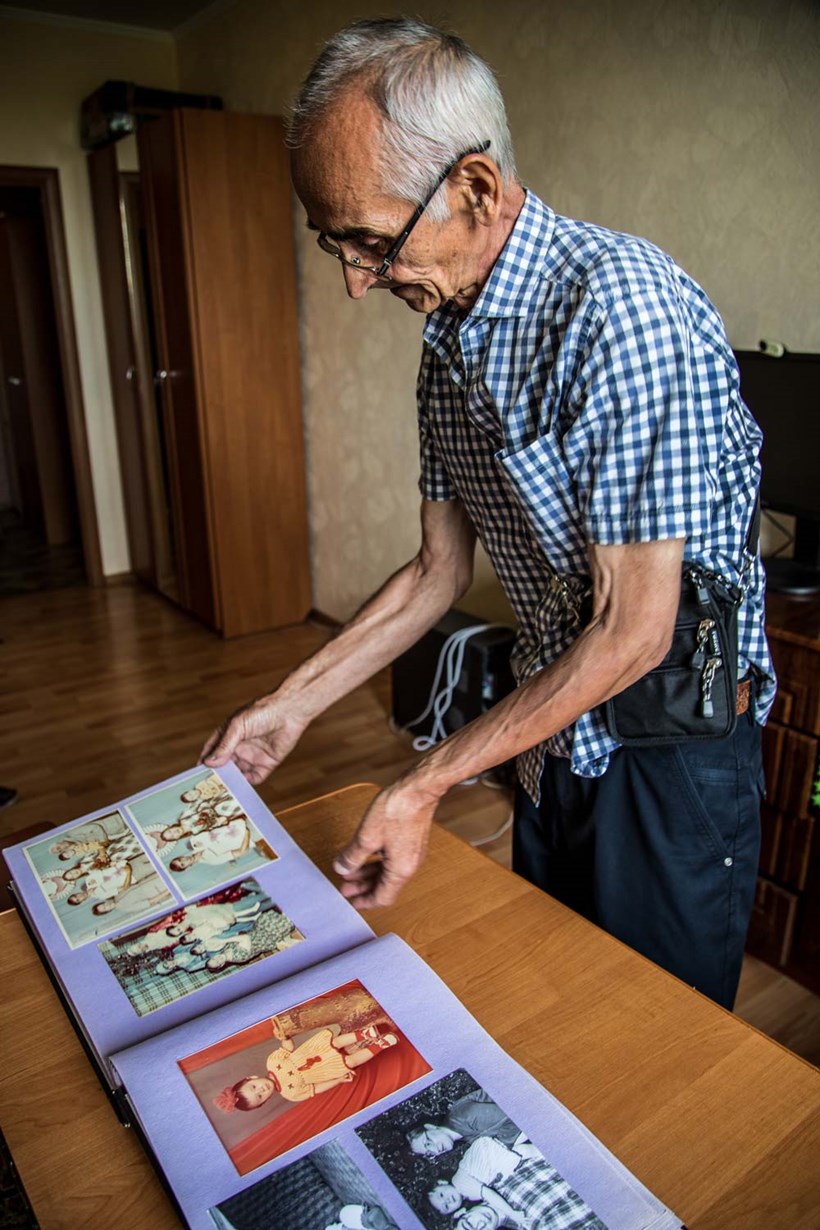 Following the accident, HALO’s survey teams are already on the ground assessing the area. Locals report that when the Russians left the grass was on fire and they heard many explosions. The State Emergency Services have found a further five grenades laid with tripwires and there have been dogs killed by explosives. Our teams use all this data to prioritise where to begin clearance to prevent further devastating accidents. Two mechanical support teams began work at Myla in August and up to 31st October have cleared 22,000 square metres. Across the Kyiv and Chernihiv regions, mines and explosives left by the fighting continue to threaten lives. HALO has 16 survey teams, locating dangerous areas, and our deminers have already begun work to make them safe.