Securing family futures through clearance in the West Bank

The agricultural land in the northern district of Jenin is some of the most productive land in the West Bank and many people rely on it for a living. Just outside the village of Deir Abu Da’if is a minefield which takes up approximately 6 acres of agricultural land owned by the Akab family. The land has been owned by the family for generations and is currently split between three brothers, Kamel Mohamed, Rashid Mohamed and Awad Mohamed. But following four mine-related accidents on the minefield, the brothers have been too afraid to use the land and are eager for HALO to clear the minefield as soon as possible. This would directly benefit 28 members from the extended Akab family.

For Kamel Mohamed, clearance would allow him to supplement the $800 monthly income he earns as a part time policeman with produce from the land. He explains he would divide the working week between working the land and the police, but the only 2 acres of cultivatable land he owns is currently situated inside the minefield.

All three brothers plan to cultivate the land with high-value crops. Kamel explains what life would be like after clearance.

We would plough the land the very next day after the clearance is finished. At first, we will plant vegetables and some fruit trees on the steep ground, but when we can afford it, we would like to build greenhouses and grow tomatoes, which would earn us more.

Kamel’s brothers Rashid and Awad both earn their primary income by farming land they rent nearby. Cultivating their own land, rather than a rented plot, would save them thousands of dollars each year.

HALO clearance of the Deir Abu Da’if minefield would not only enable these three brothers to cultivate crops, but help provide long-term economic security for their families and their children’s future. 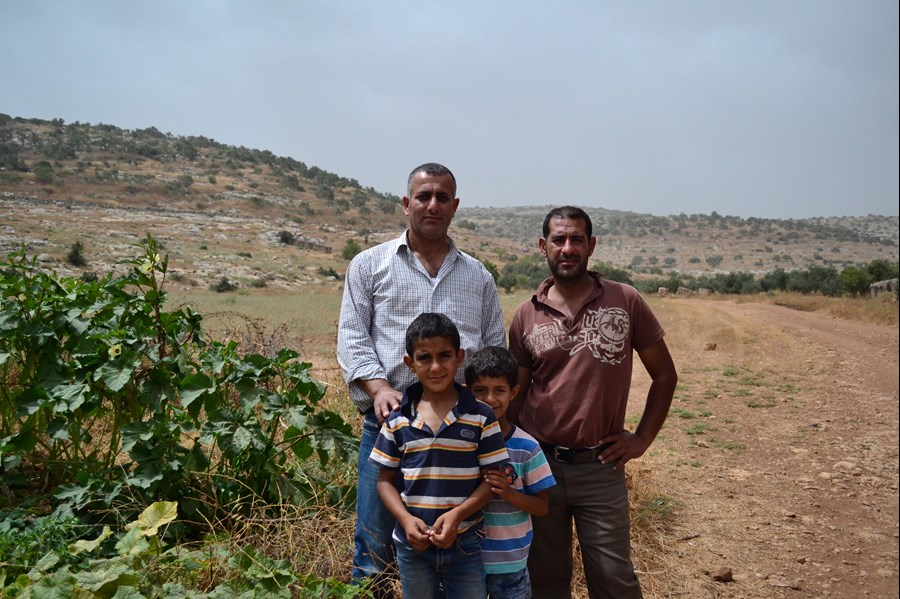 Kamel (to the left) and Rashid (to the right) with Rashid’s two sons in front of the minefield. To the left are the ocra, chilies and courgettes grown by their neighbour, showing some of the potential for the minefield once cleared.