The deadly remnants of war lurking in Syrian homes

In Syria, it is estimated 8.2 million people live in areas affected by the explosive remnants of war. Cluster munitions, IEDs—most of which are landmines—and unexploded ordnance are the lethal contaminants left by a conflict that continues to have a devastating impact on the Syrian population. Over half the housing stock is damaged and much of it is littered with explosives.

As displaced families return home, the risk of accidents mounts. Returnees are especially vulnerable to these deadly remnants of war lurking in homes, hospitals, streets and schools as they do not always realise the danger. Children — with their natural curiosity—often become victims.

HALO has been working with a Syrian NGO to educate families about the risk of explosive remnants of war as they resettle and begin to rebuild their lives. The importance of this work is illustrated by the recent experience of one of the teams:

“In early October, we visited a school in the north-western province of Idlib to give a risk education lesson. At the end of the session two small children unzipped their backpacks and emptied the contents onto a desk. They were full of cluster munitions. They had just been taught not to pick up explosives and they had backpacks full of them.” 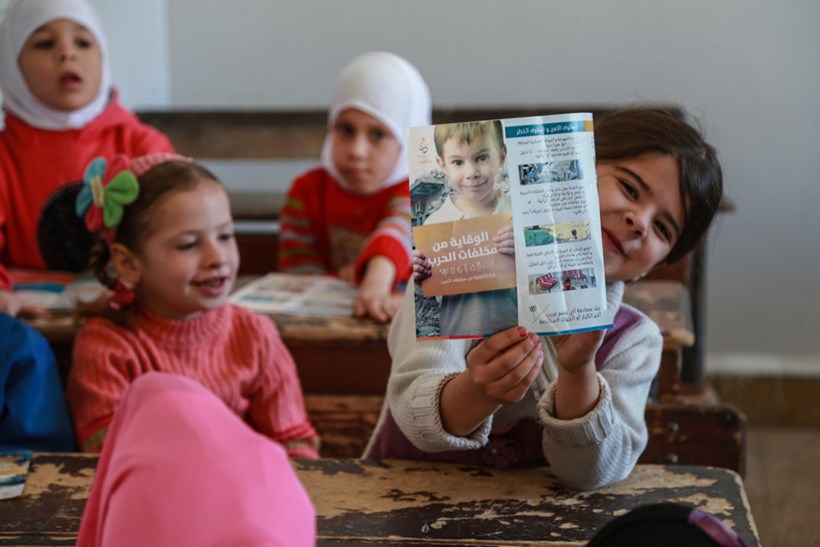 Without risk education, the outcome is often devastating. The team recently met 12-year old Mohammed. He lost 80 per cent of his vision following an accident involving unexploded ordnance—he had been secretly collecting it with a friend to earn money for food and toys. His friend was killed.

Educating local communities about the dangers of explosive remnants of war prevents accidents and allows returning families to feel more secure. Ahmad is in the second-grade, last month he attended a risk education session in his village. He was very scared of landmines; he could recount many stories of people injured by them yet did not know how to keep himself safe. During the lesson, Ahmad learnt about the types of explosive hazards in his village, how he would know when he saw one and what he should do to stay out of danger. Risk education is the first step towards providing security for Syria’s people. Ahmed is keen for the team to return as soon as possible so he can learn more.