Funding from the UK Department for International Development has been vital to the progress towards a mine-free Cambodia. Between 1997 and 2018, thanks to UK Aid HALO has cleared 1,137 minefields, releasing more than 85,600,000m2 of land to Cambodia communities and destroyed 43,729 landmines and explosive items.

Every day, 20 Cambodian communities are benefitting from DFID funded mine clearance and the announcement of new support from the UK Government will enable a further 54,410,202m2 of land to be released by March 2020. (That's equivalent in size to about 7,620 football pitches!) The released land is vital for families to cultivate, allowing parents like Chea Jeam to plan for the future.

How do you provide for your family when your land is littered with mines?

Chea Jeam is 36 years old and lives in Tuol Pongro in the northwest of Cambodia with his wife and family. He owns a small portion of land but until recently he was too afraid to cultivate it, knowing the area was mined.

Determined to provide for his family, he planted rice by hand on a small part of the land which he thought was safe, although its close proximity to the minefield caused him deep concern. Like many families in Cambodia living with the presence of landmines, he was torn between creating better opportunities for his children and his own safety.

This cultivated land only just provided enough rice for them to eat, with nothing left to sell at market. Chea Jeam’s wife also tried to support the family by opening a small shop in front of their home selling toiletries and candy but Chea Jeam was still forced to work on a nearby pig farm and even across the border in Thailand in order to make ends meet.

Planning for the future was impossible. Chea Jeam worried he did not have enough money to send his children to school and knew that one day he might need to use the mined land to give them a better future. However, in 2016, thanks to funding from the Department of International Development, HALO was able to begin clearing Chea Jeam’s land. 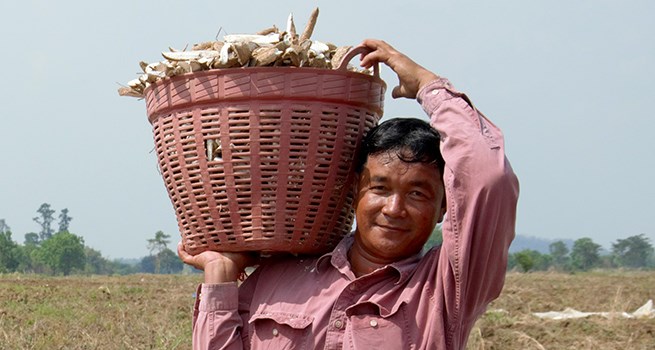 “I was shocked to see how many mines HALO found on my land, I feel so lucky that I didn’t use it otherwise I would have been hurt in a mine accident.”

HALO’s deminers found 16 landmines, including four anti-tank mines which, if detonated, would have had devastating consequences. Now the land is safe, Chea Jeam can plough and cultivate it—earning him an estimated $1,000 per year. He no longer has to go to Thailand to look for work and is able to start saving for his children’s education. By making land safe, parents like Chea Jeam are able to create a more stable and secure future for their family.

“Thank you to The HALO Trust for clearing mines out of our land so that we can use this area for farming. This will mean that we can have a better life and everyone is safe and can live without fear.”

UK Aid to remove Cambodia's landmines is part of a UK commitment made at an event with HRH Prince Harry in April 2017 of £100 million to make 150 square kilometres of land in mine-affected countries safe again over a three year period, benefiting at least 800,000 people. (Read the full press release here.)